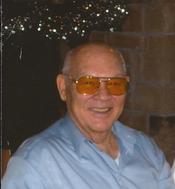 Jack Loyd Scott, age 80, Duluth, was released from his battle with dementia on Monday, April 8, 2013 with his loving family at his side. He was born to John and Vautrice Scott on August 27, 1932 in Newtonia, MO. He grew up on a ranch in Oklahoma and served in the United States Air Force during the Korean War. In August of 1952 he was transferred to the Duluth Air Force Base. He met his wife of nearly 60 years, Judy Poldoski. They were married May 2, 1953 and resided in Duluth their entire married life. Jack retired from the City of Duluth Public Works Department and was an active member of Bethany Lutheran Church for many years. Jack was preceded in death by his parents, sister Verna Elwell, and grandson Michael Hill of Monticello. He is survived by his loving wife, Judy; his children Beth (Scott) Hill, Monticello, Jackie ( Mike) Donnahue, Duluth, Steven Scott, Duluth, and Janet (Scott) Kusch, Duluth; grandchildren Stacy (Willy) Thompson, Hibbing, Amy Kusch, Duluth, Jon Kusch, Duluth, and Aaron Donnahue, Duluth; great-grandchild Alexis "Lexi" Thompson of Hibbing. Jack's generosity, kindness to others, sense of humor, and steadfast love for his family made him a very special man. He will be missed dearly. The family would like to thank Jack's caregivers for the excellent care and wonderful relationships they shared at Viewcrest Care Center. Visitation 10AM until the 11AM Funeral Service Thursday at Bethany Lutheran Church, Duluth. Burial at Bethany Cemetery. Military Honors accorded by the Combined Duluth Honor Guard. Arrangements by Williams-Lobermeier-Boettcher Funeral Home.

To order memorial trees or send flowers to the family in memory of Jack Scott, please visit our flower store.