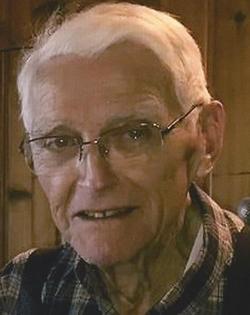 James "Jim" Clifford Foucault, 89, of Edgewood Vista, formerly of Hagberg St, passed away peacefully Saturday, August 13, 2016 in the Solvay Hospice House surrounded by his family. Jim was born on January 31, 1927 in Bemidji to Clarence and Mary (Shields) Foucault. Jim attended Denfeld High School and served in the US Navy during World War II. Upon his return, Jim studied Law Enforcement at UMD. He married Josephine "Dolly" Rukavina on April 23, 1949 in Duluth. Jim was an officer for the Duluth Police Department from 1951 to 1976, serving as a patrolman, detective, and retiring as Lieutenant and head of the Juvenile Bureau. Following his retirement, Jim worked for the St. Louis County Attorney's office as a special investigator from 1976 to 1987. Prior to moving to Piedmont, Jim was a member of St. James Catholic Church. He is a member of St. Lawrence Catholic Church and the American Legion Post 71.

Jim and Dolly spent many enjoyable and adventurous years together. Their activities together ranged from travelling the world to enjoying quiet days at their cabin at Caribou lake. Some of Jim's favorite times were spent watching grandchildren enjoying the cabin and lake.

Jim was a role model for many young people. Besides raising eight children his compassionate work in the Juvenile Bureau of the Duluth Police department earned him respect and admiration from the youth who's lives he touched. He devoted many days each year to the St. James Boy Scouts, taking his sons and many other young people on outdoor adventures.

Even if you only met Jim briefly, you will understand why he will be so profoundly missed by so many.

Jim is survived by his wife and best friend of 67 years, Dolly; two daughters, Debra (Craig) Johnson and Janet (Michael) Peterson both of Duluth; six sons, James (Jeannine) of Medford, OR, Robert (Kate) of Minneapolis, Thomas (Deborah) of Esko, David of Richland, WA, Richard (Barbara) of Ramsey, MN, John (Julie) of Duluth; 23 grandchildren and 15 great-grandchildren and one on the way; many nieces, nephews and friends.

To order memorial trees or send flowers to the family in memory of James Foucault, please visit our flower store.