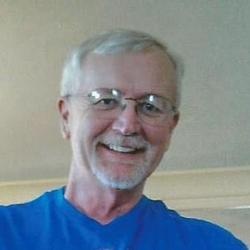 James Kenneth "Jim" Gunderson, 63, of West 6th Street, passed away peacefully Monday, June 9, 2014 at home after a courageous two and a half year battle with pancreatic cancer. He was born May 8, 1951 in Fergus Falls, MN to Kenneth and Avis Gunderson. He married Patricia "Pat" Uzarek on July 28, 1973 in Zion Lutheran Church. Together they raised three children. Jim graduated from Denfeld High School in 1969. He was a student at UWS and UMD, but found his true calling as a graduate of D.A.V.T.I. in the forestry program. He was employed at Northeast Mack Truck until 1981. At that time he went to work at Road Machinery and Supplies (RMS) selling forestry and heavy equipment. He remained there until his early retirement. Jim was an active member of Zion Lutheran Church. He served many years on the council as a member and as president. He was on the properties board, the personnel committee and had been a Sunday school teacher. He was an active member of Trinity Masonic Lodge A F & A M, and the Minnesota Timber Producers Association. Jim enjoyed spending time at the cabin and deer shack planting trees, hunting, fishing, shooting sporting clays and just relaxing. He cherished his time with his family. He especially enjoyed watching any event his children and grandchildren participated in. Jim was preceded in death by his parents, a brother, Donald and mother-in-law, Beverly Uzarek. He is survived by his wife of 41 years, Pat; three children, Brett A. (Sarah) of Superior, WI, Trisha J. (Joseph) Cherney of Cass Lake, MN and Brian J. (Rosario) of Grand Rapids, Michigan; eight grandchildren, Noah, Lauren and Micah Gunderson, Jared, Tanner and Callen Cherney and Oscar and Oliver Gunderson; father-in-law, Gerald Uzarek; three sisters, Pat (Dick) Halverson, Nancy (Jim) Westman and Karen (Kevin) Riggs; three brothers, Ronald (Vickie), Bill and Scott (Billie) and many nieces, nephews, friends and customers that kept in contact. The family would like to thank Dr. Basem Goueli and the staff from Infusion, the wonderful staff at St. Luke's 2West and the St. Luke's Hospice team for their care of Jim. Visitation will be from 5 to 7 p.m. Friday, June 13, 2014 in Williams Lobermeier Boettcher Funeral Home with a Masonic service at 6:30 p.m. Visitation will continue from 10 until the 11 a.m. funeral service Saturday in Zion Lutheran Church, 2431 West 3rd St. Pastors Patrick McCormack and John Reppe officiating. Burial in Oneota Cemetery. Memorials would be preferred.

To send flowers to the family in memory of James Gunderson, please visit our flower store.