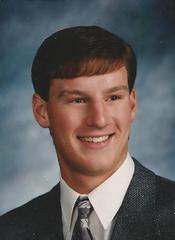 James "Jim" L. Jentoft, 37, Duluth, died Thursday September 13, 2012 at St. Luke's Hospital with his family by his side. Jim was born on October 4, 1974, in Duluth to Larry and Susan Jentoft. He graduated from Duluth Central High School in 1993, where he had been a member of the baseball, football and swim teams. He had attended UMD. Jim married Diana Pelayo on December 12, 2001. Jim was a member of Christ Lutheran Church. He worked at UMD from 1996 until his death. He was an avid fan of Minnesota sports and especially enjoyed watching the Twins. Jim was a much loved husband, father, son, brother and uncle. He will be greatly missed by his family and many friends. He is preceded in death by his maternal grandparents Clifford and Elizabeth Backstrom and paternal grandparents Lawrence and Astrid Jentoft. Jim is survived by his wife Diana, son Nicholas, daughter Madison and step daughter Melissa, parents Larry and Sue Jentoft, sister Jill (Terry) Swihart and their children Caleb and Mackenzie, mother in law Maria Jimenez Barcenas, sisters in law Susana (David) Woodward and their children Sebastian and Marcos, and Daniela Pelayo, brother in law Daniel Pelayo, uncle Jim (Beth) Backstrom, aunt Jean Clark and several cousins. Jim's family would like to thank the nurses and doctors in the 6 West ICU at St. Luke's for their kindness, care and support. Visitation Sunday 4-6PM at Williams-Lobermeier-Boettcher Funeral Home and continues from 10AM until the 11AM Memorial service Monday at Christ Lutheran Church, 2415 Ensign St., Duluth. Memorials preferred.

To send flowers to the family in memory of James Jentoft, please visit our flower store.