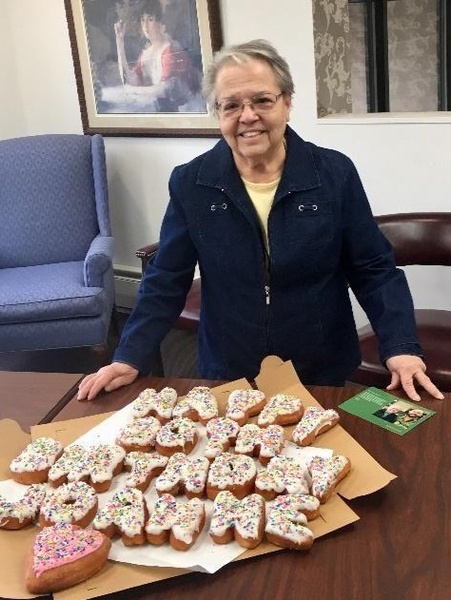 Joanne Margaret (Baune) Goerts died January 5, 2021 at Chris Jensen Health and Rehabilitation Center in Duluth, MN. She was born to Flora and Orphie Baune on April 5, 1939 in Dunseith, ND and was the oldest of four. Joanne married Gerald (Jerry) L. Goerts in a civil ceremony in Couer d’Alene, ID, November 18, 1955 and a church ceremony in Spokane, WA, November 19, 1955. Their 60 years of romantic devotion remains a hallmark to all they knew, even after Jerry’s death in 2015. They raised seven children starting in Duluth, moving to I. Falls, MN in 1966 and was an active member of St. Thomas Aquinas Church. Joanne earned her GED in 1974 with some of the highest scores on record which was no surprise to her family as she was a voracious reader, especially historical artist and musician biographies. She worked as a teller at Bremer Bank until they moved back to Duluth in 1987 and with North Shore Bank here. Just prior to retirement, Joanne enjoyed her time at St. Mary’s Medical Center and SMHS as a clerk in health information services. She was an inherent artist as exhibited in her middle school etchings, using a variety of crafting and interior design to express her creativity. Joanne was the consummate entertainer, hosting decades of memorable events, including high teas, holiday-themed parties, and birthdays fit for royalty. She was committed to volunteering, cherishing her time at St. Michael’s Used-a-Bit and Gabriel’s Bookstore in Duluth as part of her St. Michael’s parish devotion. She made a special group of friends through exercise and coffee with her Curves crew. Joanne was preceded in death by her parents and in-laws, her husband, her brothers Kenneth and Ray, her stepsister, Mary, and granddaughter, Stephanie. She is survived by her brother, Floyd Baune, Lubbock, Tx, children: Madonna (Larry) LeBlanc, Duluth, Theresa Goerts, Crystal, MN, Thomas (Rosie Gordon) Goerts, I. Falls, MN, Suzanne (Mark) Haen, Fargo, ND, Kristen Goerts, Fountain City, WI, Gerald (Katie) Goerts, Jr., Superior, WI, Bruce (Mary) Goerts, Melbourne, FL, 19 grandchildren and 11 great-grandchildren. Arrangements by Williams Lobermeier Boettcher Funeral Home & Cremation Services. A celebration of her life will be held later.

To send flowers to the family in memory of Joanne Goerts, please visit our flower store.