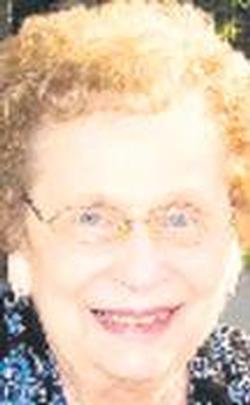 Joanne Margaret Overom, 88, of Richfield, MN, died peacefully on Dec. 21, 2015. She was born on Aug. 5, 1927, in Duluth, MN, to Hugo and Margaret Hedeen. After graduating from high school in 1945, Joanne worked at the U.S. Steel Mill in Morgan Park. She married Leon Overom on Nov. 26, 1949, and they spent nearly 56 years together until Leon passed away in 2005. While living in Minnesota, they raised four children and enjoyed many winters in Arizona during their retirement years. Joanne was very artistic and took pleasure in creating many beautiful stained glass pieces and oil paintings which adorned her home and were shared with friends and family members. She also had several hobbies which included playing bridge, sewing, going to the casino and making an array of crafts with her life-long friends in the Kraft Klub. Joanne was an excellent cook and will be remembered for her homemade rolls and gravy. She is survived by sons Tim (Jackie), Burnsville, MN, Steve (Julie), Barnes (WI); twin daughters, Lisa, Bloomington, MN, Laura (Craig) Joseph, Wayne, NJ; grandchildren Pat (Jenny) Overom, Heather (Brian) Ocel; Erin (Tod) Dungan; Ryanne (Sean) Smith; Meghan (Alex) Law and nine great-grandchildren. Visitation 10AM until the 11AM Mass of Christian Burial Saturday Jan 2, at St. Lawrence Catholic Church, 2410 Morris Thomas Road, Duluth. Burial at Oneota Cemetery. Williams-Lobermeier-Boettcher Funeral Home is entrusted with final care. Memorials can be made to St. Lawrence Church, 2410 Morris Thomas Rd, Duluth, MN 55811.

To order memorial trees or send flowers to the family in memory of Joanne Overom, please visit our flower store.