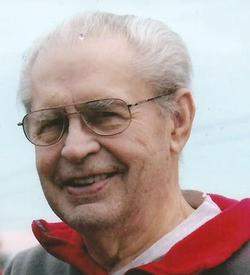 John "Jack" Thomas Bates, 84, formerly of North Shore Drive and Gearhart St, died Thursday, September 24, 2015 in St. Luke's Hospice. Jack was born on August 22, 1931 to Leon and Isabelle "Topsy" (Ranum) Bates in Willmar, MN. Jack was a 1949 graduate of Willmar High School and earned his B. S. Degree in Business from Mankato State University. Jack was a U. S. Army Veteran serving in the Korean War, while stationed in Japan, he climbed Mt. Fuji. He married Joan O'Hara on February 19, 1955 in Iowa. Jack excelled in athletics, he was the goalie for the Willmar High School Hockey team when they made it to the State Hockey Tournament in 1947. They lost to the powerhouse, Eveleth, in the first round, his photo can be seen in the U.S. Hockey Hall of Fame. While at Mankato, Jack participated in track and at one time, held the small college record in the 440 yard Dash. He followed in his dad's footsteps by becoming a Golden Glove Boxer. He was an avid outdoorsman, loved hunting and fishing. Jack managed National T and Super Valu Grocery Stores prior to owning and operating the Wonderland Resort on the North Shore of Lake Superior. He and his wife, Joan ran the resort from 1968 to 1998. Jack also was a school bus driver for the Clover Valley and Two Harbors School Districts. He was a member of the Clifton Volunteer Fire Department and St. Lawrence Catholic Church in Duluth. He was preceded in death by his parents, an infant son, Kevin and a brother, Robert. He is survived by his wife of 60 years, Joan; two daughters, Tara (Scott) Golden of Duluth and Erin Bates of Cloquet; three sons, Colin (Sharon), Gareth and Kirk (Heather) all of Duluth; a sister, Nancy (Harold) Haugen; two brothers, Charles and Daniel (Geri); sister-in-law, Ellie Bates; 14 grandchildren and 15 great-grandchildren and many nieces and nephews. The family would like to thank St. Luke's 6W and 2W and Chris Jensen Willow and Cedar Units for the wonderful care of our dad.

To send flowers to the family in memory of John Bates, please visit our flower store.