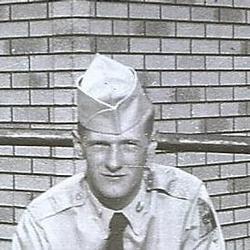 John "Jack" Earl Donnahue, born August 19, 1929, in Duluth, MN to Earl and Florence (McCullough) Donnahue, passed away September 17, 2015. He married the love of his life, Carrie Parr on December 2, 1950 at St. Clements Church. Graduated from Denfeld High School in 1948. He was a U. S. Army Veteran serving in Korea during the Korean Conflict, April 1951 - 1953. He was a glazing foreman for St. Germain's retiring after 40 years. He was a member of Holy Family Catholic Church and the VFW Post 137. He looked forward to playing cards with monthly Card Club for over 30 years and also the Sunday afternoon card games with lifelong family friend, Bonnie I. His best times were family get togethers and having all the children and grandkids around him. He was affectionately known to his grandchildren as "Bubbles". He enjoyed watching the Twins and Vikings. He was preceded in death by his parents and a sister, Mary Lou Donnahue. He is survived by his loving wife of 64 years Carrie. They would have been married 65 years on December 2nd. Children, Muffy (John) Kalenowski, Michael (Jackie) and Kelly, all of Duluth; grandchildren, Connor and Keegan Kalenowski, Stacy (Willy) Thompson, Aaron Donnahue, John and Brady Donnahue; great grandchildren, Alexis and McKenzie Thompson and sisters, Darlene Clark of Arizona and Laurie Skow of Duluth. Visitation 10 until the 11 a.m. Mass of Christian Burial Thursday, September 24, 2015 at Holy Family Catholic Church. Rev Fr Terry Figel, O.M.I. officiating. Military Honors accorded by the Duluth Combined Honor Guard. Burial in Sunrise Cemetery. Memorials to Holy Family Catholic Church would be appreciated. To sign the guestbook on-line, visit www.wlbfuneralhome.com. Williams Lobermeier Boettcher Funeral Home is entrusted with final care.

To order memorial trees or send flowers to the family in memory of John Donnahue, please visit our flower store.