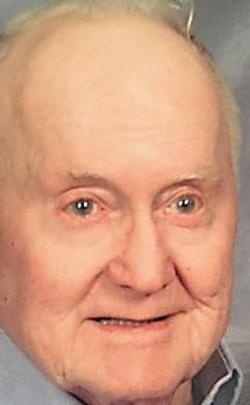 John J. (Bud) Thorp, formerly of Duluth, passed away peacefully at his home in Plymouth, Minnesota on Tuesday, June 21, 2016. He was born on December 18, 1926 to J. Clarence and Katherine (Smith) Thorp at St. Luke's Hospital in Duluth. At eleven years old he began working in the family grocery business, J. J. Thorp and Company. John graduated from Duluth Denfeld High School in 1944 at the age of 17. Immediately after graduation, he enlisted in the U.S. Navy and served on a destroyer in the Pacific during World War II. After his discharge he re-joined the family grocery business where he worked until retirement. On June 19, 1948 he married his high school sweetheart, Muriel Nystrom. They celebrated their 68th wedding anniversary two days before he passed away. Together they raised three sons. In 1960, John was named manager of the then newly constructed Mt. Royal Super Valu store in the Mr. Royal Shopping Center. In 1979, he moved the store into a new, larger building that today is Mt. Royal Fine Foods. He sold the business and retired in 1985. After retirement, John and Muriel built a home on Sand Lake where they lived until returning to Duluth in 2002. For thirty years they spent their winters in Arizona. In 2013, they moved to an assisted living facility in Plymouth, Minnesota. John was a member of Hillside United Methodist Church. He was a member of the Trinity Masonic Lodge and a former member and past president of the Twin Ports Grocers Association. He was preceded in death by his parents and his sister Maryjane Swanson. In addition to his wife Muriel, he is survived by their three sons: Timothy (Phyllis) of Duluth, David (Deborah) of Brooklyn Park, Minnesota and Peter (Kristin) of Plymouth, Minnesota; seven grandchildren: Jason, Daniel (Valerie), Matthew (Theresa), Jeffrey, Alissa, Nicholas, and Joshua; three great-granddaughters: Marin, Evalina, and Maeve; sister, Marjorie (Ralph) Anderson, sister-in-law, Gloria Peterson; and several nieces and nephews. Service: 11:00 am Tuesday, June 28, 2016 at Hillside United Methodist Church, 1801 Piedmont Avenue. Pastor Sam Kautz officiating. Visitation will be in the church from 10:00 am until the funeral service. Interment will be at Oneota Cemetery. Military Honors accorded by the Duluth Honor Guard. If desired, memorials may be made to Hillside United Methodist Church.

To send flowers to the family in memory of John Thorp, please visit our flower store.