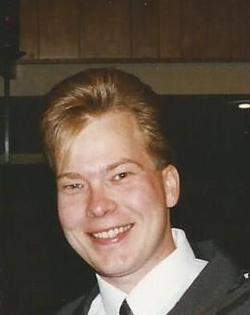 Jon Louis Donahue, 49, of Duluth, passed away peacefully Saturday, Sept 13, 2014 in the Solvay Hospice House surrounded by his family. Jon was born in Duluth on April 14, 1965 to Ronald and Phyllis Donahue. He was a 1983 graduate of Denfeld High School and attended UWS for broadcasting. He also went to Cosmetology Careers. He married Lisa Porter on October 25, 1995 in Duluth. He was a member of St. Lawrence Catholic Church. Jon served on the patient advisory council at Miller Dwan Alcohol, Tobacco and Gaming Commission for six years, where he became president. Jon loved politics, he ran for Mayor of Duluth and Duluth School Board. Jon worked at Shear Katz for 15 years, and left there for PACT TV. While at PACT TV, he started the TV show, "The Average Guys" which ran from 1999 until he became ill in 2012. Jon had a great love for baseball and collected baseball cards for years. He loved to camp with his family, have camp fires with his friends and family and loved music, especially, "Rush". He also loved playing baseball for Charlie's Rebels for 15 years. He was preceded in death by his father, Ron; maternal grandparents, Dagney and Louis Stockman; paternal grandparents, Reno and Myrtle Peterson. He is survived by his wife, Lisa; his children, Alyssa, Jacob and Tyler; his mother, Phyllis Donahue; a sister, Kelly (Russell Dresser) Donahue; two brothers, Kevin (Ava) and Bob; several nieces and nephews. The family would like to thank Solvay Hospice House and Essentia Health Team for all the wonderful care. Visitation 5 to 7 p.m. Wednesday, Sept 17, 2014 in the Williams Lobermeier Boettcher Funeral Home. Visitation will continue from 10 until the 11 a.m. Mass of Christian Burial Thursday in St. Lawrence Catholic Church. 2410 Morris Thomas Road. In lieu of flowers, please consider memorials, in care of Lisa, for an Educational Fund for Jon's children. To sign the guestbook on line, visit www.wlbfuneralhome.com.

To send flowers to the family in memory of Jon Donahue, please visit our flower store.