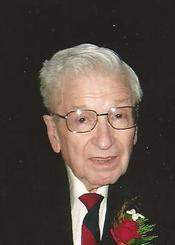 Joseph Ambrose Rich, 87, of Wyoming St, lost his 28 year battle with Parkinson's disease on Friday, December 28, 2012 in the Minnesota Veterans Home in Silver Bay. He was born in Duluth on January 11, 1925 to John and Carmel (Scinocca) Rich. Joe graduated from Central High School and completed the Baking course at Duluth Vocational School. He was a U. S. Navy veteran serving in the South Pacific during World War II aboard the USS Rotanin as a baker. The film, Mister Robert's was based on the USS Rotanin. Joe married Margaret "Peggy" Barncard on July 9, 1947 in First United Methodist Church in Duluth. Joe was a well-known cake decorator, area manager for Gerber Baby Foods and a prankster. He was a life member of the VFW Post 137, a member of Lester Park United Methodist Church, Aad Temple Shrine and the Directors Staff, Scottish Rite Bodies Valley of Duluth, a past master of Trinity Masonic Lodge and was the Shrine Santa Claus for many years. The family would like to thank the staff at the Minnesota Veterans Home for the outstanding care they provided. He was preceded in death by his parents, sister, Jane Rich and two grandchildren. He is survived by his wife, Peggy; a daughter, Sue (Steve) Slotness of Duluth; twin sons, Jim F. (Joan) Rich of Duluth and John A. (Brenda) Rich of Maple Grove, Minn; six grandchildren and three great-grandchildren. Visitation will be from 12:30 until the 1:30 p.m. funeral service Wednesday, January 2, 2012 in the First United Methodist Church. 230 East Skyline Drive. Rev Sam Kautz officiating. Entombment in Forest Hill Cemetery accorded by the Duluth Combined Honor Guard. In lieu of flowers, memorials to Lester Park United Methodist Church or the Parkinson's Disease Foundation, 1359 Broadway, Suite 1509, New York, NY 10018 would be appreciated. To sign the guestbook online, visit www.wlbfuneralhome.com. Arrangements by Williams Lobermeier Boettcher Funeral Home.

To send flowers to the family in memory of Joseph Rich, please visit our flower store.