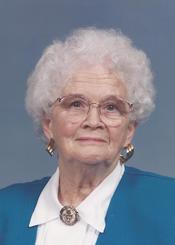 She was born in Duluth on June 9, 1918 to Florence and Andrew Grenner. A life-long Duluth resident, she grew up in the West End, was a graduate of Denfeld High School and graduated from St. Luke's School of Nursing as a registered nurse. She married Lloyd H. Grytdahl on April 4, 1941.

June enjoyed the outdoors. Her parents owned a cabin on Grand Lake where she spent many days enjoying the Minnesota summers with her brother and cousins. She enjoyed swimming and was an avid golfer. She also enjoyed indoor activities. June had many wonderful, loving friends who regularly met to play bridge at each other's homes, sharing many hours of laughter and friendship. In addition, June's home was a focal point for family gatherings as she prepared many wonderful meals for family and friends.

June volunteered at the Lakeshore Lutheran Home before going to work there full time as an RN for 18 years, retiring as a head nurse in 1985. She was a member of the Lutheran Church of the Good Shepherd and its Deborah-Priscilla Circle as well as a member of several other organizations: St. Luke's Alumni, Lakeside AARP and a fifty year member of the P.E.O Sisterhood - Duluth Chapter AL. June also was a Cub Scout den leader and did volunteer work at the Synod House, soup kitchen and in the church offices at Good Shepherd.

June was preceded in death by her husband, Lloyd; her parents, Florence and Andrew Grenner and her brother, Robert Grenner, who died with the Marines on Iwo Jima.

Mom, thanks for all you did for us.

To order memorial trees or send flowers to the family in memory of June Grytdahl, please visit our flower store.