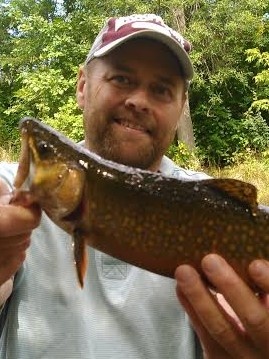 Karl Frederick Randa, 52, passed away peacefully, Thursday evening, April 27th, 2017, at the Solvay Hospice House following a long, courageous battle with cancer. He was surrounded by his wife, four sons, family and dear friends. Karl was born June 16, 1964 in Duluth, MN to Sigurd and Shirley Randa. He grew up in Lincoln Park (West End), graduated from Denfeld High School with activities including diving/swim team, choir, and drama.  Karl attended the University of Minnesota - Duluth and the Federal Law Enforcement Training Center in Glyncoe, Georgia. He then began his career as a Federal Correctional Officer at the Federal Prison Camp in Duluth. He was promoted to First Lieutenant very quickly due to his expertise, kindness, and knowledge. Karl transferred to the Federal Correctional Institution in Marianna, Florida with his wife. There he continued as Lieutenant, Supervisor and Instructor at the entire institution.  Next, Karl, was transferred to the Federal Medical Institution in Rochester, MN, before retiring from an exemplary career at the Federal Correctional Institution in Sandstone, MN. Throughout his career, Karl was a Leader of the Disturbance Control group. He was also a SORT team leader for many years, during which he became an expert of protecting our communities, and was looked up to by all he met, taught, and lead.  Karl Randa married Mary Stenstrom on November 25,1984 leading to a 31 year marriage, and being each other’s best friends. Together they raised four sons. Karl was a confirmed member of Zion Lutheran Church, and he and his family are members of Peace of Christ Lutheran Church. Karl Randa was a devoted husband, father, brother, son and friend. Karl had a captivating smile, was very charismatic, and was a friend to anyone he met, as he was blessed from God to do so. Karl was happiest when he was taking family vacations in their camper. He was an avid fisherman and loved angling with his boys and friends on the North Shore rivers and Minnesota lakes. He also was an expert fishing guide in the Boundary Waters Canoe Area, right out of high school where he also learned to run sled dogs. This later became helpful as Karl was a talented actor who worked part-time and landed roles in films such as Walt Disney’s “Iron Will” where he played the icelandic musher “Thordur Thorenson,” a joy he and his wife experienced for six months of work. Karl also worked on the films ”In Winter,” “Revenge for Lost Love,” “Expendable Assets,” “I am not a Serial Killer,” “No Blood of Mine” “Wilson,” and Duluth’s “Old Lifty,”

Karl’s beautiful smile, good nature and big-big heart blessed him with many dear friends throughout his life. He will be missed deeply by all of his family, friends and all of the lives he touched.  He is survived by his wife, Mary (Stenstrom); his four boys; Nelsen, Kal, Reed and Noah, his parents Sigurd and Shirley Randa, along with his parent’s-in-law Bud (Eldon) and Ann Stenstrom who treated him as a son, his brothers Jon (Kathy), Eric (Kim), Kris (Yvonne), Leif (Lori),  and sister Lori (Joe), his brothers-in-law Mike (Lisa) and girls, Scott and family, brother David with his fiancée Lark and many nieces, nephews and their children which he loved immensely.

A special thank you to the doctors and nurses at Essentia Oncology, and dialysis as well as the caring staff at the Solvay Hospice House. Also, all family and friends who truly stood by him including neighbors, especially Clarence & Marge Black. Thank you to the Hermantown Schools, Peace in Christ Church, All high school friends, especially “Karl’s Crew.”

To send flowers to the family in memory of Karl Randa, please visit our flower store.