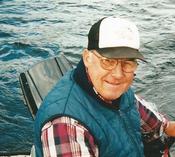 Kenneth William"Knute"Johnson, passed away peacefully on September 14, 2012 after a courageous two and one half year battle with lung cancer. Ken was born on March 13, 1937 to William and Josephine (Hullin) Johnson. He was a lifelong resident of Duluth, graduating from Denfeld in 1955. He was also a member of the Air National Guard from 1954 to 1994. His entire working career was as a proud Teamster which included driving for Glendenning, Briggs Transportation and Roadway, retiring in 1994. Ken was an avid outdoorsman who enjoyed fishing, hunting, snowmobiling and four-wheeling. He enjoyed his buddies as a member of the Black Hats and the Wrinkle Riders. Most of all he enjoyed spending time with his family and his grandchildren, who he was very proud of. He was the loving father of three children and a devoted grandfather to four grandchildren and a step-grandson. He was a loving brother and a good friend to many. Grandpa Ken could be counted on for a hug and encouragements. He loved to watch the kids participate in sporting events or extracurricular activities and then take them for ice cream. He would often go visit his grandchildren in Green Bay. He enjoyed teaching the kids how to fish or hunt and made sure they did it safely. Dad was a simple man who enjoyed a good meal, conversation and a game of cribbage. He could always be counted on to give advice (usually about a Ford). His favorite phrases were"you betcha" and "Hail Jimmy Hoffa". Dad will be missed but always loved and remembered for a big heart and kind ways. He is preceded in death by his parents Bill and Josie and younger brother Lyle. He is survived by his children Penny Dubois of Green Bay, WI, Sharon(John)Patton, Eveleth, Kenneth "Mike"(Cheryl)Johnson, Alborn, grandchildren Katie, Phillip, Steven, Matthew and Billy (Kris) Patton, brother Ronald(Diane)Johnson, Indian Wells, CA, sister Lucille(Don)Schwartz, Madison, AL and numerous nieces and nephews and many wonderful and caring friends. The family would like to thank the staff at Diamond Willow in Cloquet and the Hospice team for their kindness and care of their father in his end of life journey. Visitation noon until the 1PM funeral service Wednesday at Williams-Lobermeier-Boettcher Funeral Home. Burial at Park Hill Cemetery.

To send flowers to the family in memory of Kenneth Johnson, please visit our flower store.