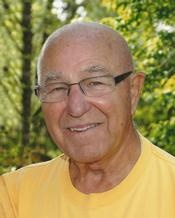 Laurence A. "Babe" Moran, 91, died June 15, 2012 at the Iowa Veteran's Home, Marshalltown, Iowa from complications of Alzheimer's disease. He was born on Feb. 11, 1921, in Duluth, to Ralph & Christine (Vechello) Moran. He graduated from Denfeld High School in 1939. He was employed in Duluth and Detroit until enlisting in the Naval Aviation program in May 1942 and was awarded his gold Navy pilots wings in June 1943, served two tours as a combat pilot in the south Pacific, until his release in Nov. 1945. Among his many decorations are the Distinguished Flying Cross and the Air Medal. In 1947 he established Moran Photo Studio in West Duluth as a portrait & commercial photographer. In June of 1950 he was recalled by the Navy, spent two years patrolling the Aleutian Islands and an additional two years as a flight instructor in Glenview, Illinois. He was discharged from the US Navy Reserve as a Lieutenant Commander. Upon returning to Duluth he resumed his studio operations and was a working photographer until retirement. In 1993 he married Sue Dye; they divided their time between Hampton, Iowa and Mesa, Arizona. In retirement he became a master wood carver, but never lost his interest in photography and aviation. He was preceded in death by his parents, granddaughter Christina Moselle, sister Lena, brothers Clarence and Vernon and sisters-in-law Val, Norma & Jane. He is survived by his wife Sue, daughters Roberta (Gene) Moselle, Superior, Wisconsin, and Lynn (David) Meyer, St. Paul, grandchildren Sarah Moselle, Charlie, and Lucy Meyer; great-grandchildren, Christina and Robert Moselle; brothers, Cliff, New Iberia, Louisiana and Ken (Jackie), Duluth. He will be missed by many nieces, nephews, cousins and close friends. The family would like to thank the Iowa Veteran's Home for their wonderful care. Visitation 1 until the 2 pm Memorial Service Saturday, June 30, 2012, at Williams-Lobermeier-Boettcher Funeral Home. Burial in Calvary Cemetery accorded by the Duluth Combined Honor Guard. In lieu of flowers, the family requests that a donation be made to the East Central Iowa Chapter of the Alzheimer's Association, 317 Seventh Avenue SE, Cedar Rapids, IA 52401.

To send flowers to the family in memory of Laurence Moran, please visit our flower store.