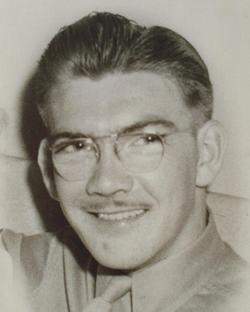 Lawrence "Larry" Eckenberg, 91, a lifelong Duluth resident, passed away Friday morning August 8, 2014 at St. Luke's Hospital Hospice Care after a short illness. He had lived at Edgewood Vista for the last six years and Heritage Haven since April. Larry's birthday was March 6, 1923, the older of two sons born to Fritz Edward Eckenberg and Ruth Helen (Nelson) Eckenberg. Larry graduated from Denfeld High School in 1942 and began working full time for MacDonald Motor Company, a DeSoto-Plymouth dealership in downtown Duluth, until joining the United States Army in 1945 stationed in Washington D. C. He married Duluth Central High School grad Betty Lou Wirth in February 1946 and returned to the car dealership as a regional sales representative and eventually its parts department manager. In 1960 when DeSoto was no more and the dealership closed, Larry began a new career with St. Germain's Paint & Glass Company from which he retired as sales floor manager in 1988. Larry was an honest hard working husband and Dad, like most of his generation, with a deep love for his family, his country and his farm and working class roots beginning in Port Wing, WI and West Duluth. He was also a talented carpenter, devoting himself to extensive remodeling projects in each of the seven houses he lived in during his life.

After the end of a twenty-seven year marriage to Betty, Larry married Norma Jean (Nelson) Brown, a Denfeld classmate, in 1978 and celebrated over 35 wedding anniversaries with her. Larry and Norma enjoyed years of travel-trailering, attending the first ten years of WE Fest country music festivals in Detroit Lakes, MN, where their garrulous nature and good humor won them life-long friends. As an old man, Larry often remarked to his son about how good he felt, with no aches or pains, which he attributed the avoidance of all organized high school athletic endeavors. Instead, he built great memories roller skating at the old Duluth Curling Club, always lighting up his skates when the houselights turned low. Larry was an active member of the Moose Lodge, the American Legion, and the Elks BPO Lodge No.133. He and Norma volunteered as drivers for Meals on Wheels for many years. But more than anything, as a past-time, he loved the American automobile, learning to drive a Model T Ford at the age of six, and wistfully pursuing all things cars for the rest of his life. His personal favorites were a '41 DeSoto and a '56 Dodge Lancer. Larry was preceded in death by his parents, Fritz and Ruth, brother Vernon Eckenberg and sister-in-law Donna (Howard) Eckenberg. Larry is survived by his wife Norma of Duluth; Betty Wirth Dawson, the mother of his children; daughter Lana (John) DeSanto and son Gary (Barbara) Eckenberg all of Duluth; five grandchildren: Lindsay (Ryan) Kern and Meghan Eckenberg both of Duluth; Amy (Jared) Felix of Maple Lake, MN, Abby DeSanto and Adam DeSanto both of Minneapolis; great-grandchildren Reagan Kern and Paisley Kern of Duluth, Timothy Felix and Annabelle Felix of Maple Lake, MN; nephew Darrell (Jill) Eckenberg of Duluth; and Norma's son Bryan (Cathy) Brown of Duluth.

To send flowers to the family in memory of Lawrence Eckenberg, please visit our flower store.