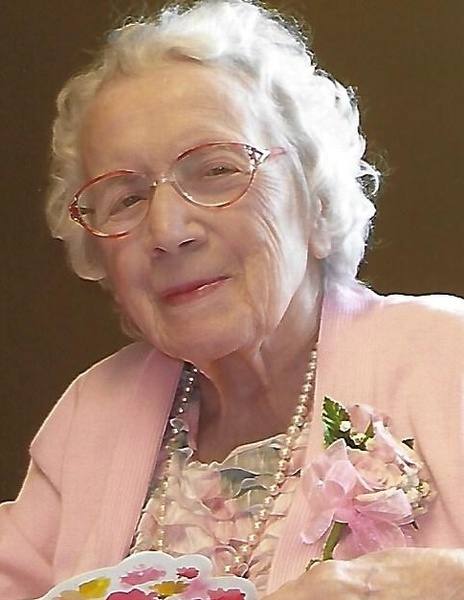 Lena "Pat" Johnson, passed away peacefully, Saturday, July 15 th at the Viewcrest Health Center, at the age of 103 years, 8 months.

Lena was a generous, giving, loving mother and grandmother.

Lena was a first generation born of Italian immigrant parents, coming to America from Italy in 1908. Lena was born on November 15 th, 1913, in Red Granite, WI, to Anthony and Catherine Franze. They then  moved to West Duluth, starting a family bakery shop on 59 th and Grand Ave.

Her father was killed in 1919, delivering bakery goods when Lena was five years old. Her mother Catherine raised her three children through the Great Depression. Lena met her husband Ralph M. Johnson, a good looking Swede, working in a neighborhood grocery store. In 1932 they married. They had two children, Dale Maynard and Sharon Rae.

Lena was a home maker, working briefly for son when he was starting Johnson Carpet and Tile Co. in 1955.

Lena was a member of the Asbury Methodist Church.

She was preceded in death by her parents, husband Ralph, brother William Franze , sister Mary Winness and grandchildren Sherri and Jay.

The family would like to thank the people at Viewcrest Health Center for the wonderful care they provided to Lena these past years. Memorial Service August 29, 2PM at Asbury United Methodist Church, Duluth.

Memorials may be directed to the Asbury Methodist Church's Kitchen fund.

To send flowers to the family in memory of Lena Johnson, please visit our flower store.