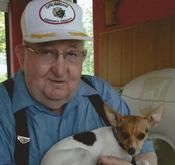 Leonard "Doc" Cyril Archambeau, 91, of Stebner Road, Hermantown, died Tuesday, December 10, 2013 at his daughter's home in Esko. Doc was born on December 13, 1921 in in Duluth to Cyril and Alvina Archambeau. Doc was a lifelong Hermantown resident attending Washington Grade School and Lincoln High School. At a very young age, Doc started working at Engwall Green House up until 1941, then started working at the U S Steel Plant. Doc was a U S Army Veteran serving in World War II with the 601st Tank Destroyer Battalion in Africa, Italy France, Germany and Austria, where he received two Presidential Citations. He returned to Duluth in 1945 and to his job at the Steel Plant, retiring as Plant Superintendent until it closed in 1979. He married Letty Pilcher in 1947 and she passed away in 1990. Doc enjoyed hunting, fishing, baseball, four wheeling, snowmobiling and spending time at the cabin. He was a member of St. Lawrence Catholic Church, American Legion Post 71, a past fire warden and a member of the Hermantown Fire Department for 24 years. He was preceded in death by his parents, his wife, a son, Melvin, all of his 13 siblings, and a special friend, Lavon Likness. Doc is survived by two sons, Robert (Shelly) and Steven both of Hermantown; two daughters, Linda (Chris) Kilbane of Esko and Julie Archambeau of Duluth; eight grandchildren and eight great-grandchildren; his little K-9 companion, Abby. Visitation will be from 10 until the 11 a.m. funeral service Friday, December 13, 2013 in Willliams Lobermeier Boettcher Funeral Home. Entombment in Sunrise Cemetery. Military honors accorded by the Duluth Combined Honor Guard.

To order memorial trees or send flowers to the family in memory of Leonard Archambeau, please visit our flower store.