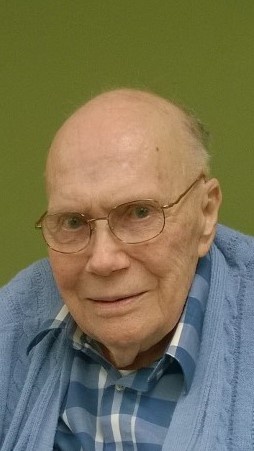 Lloyd C. Tillman, 96, formerly of Duluth, MN, passed away peacefully at the Benedictine Health Center Innsbruck in New Brighton, MN on September 10, 2017.  Lloyd was born in Duluth on March 13, 1921 to Oscar and Anna Tillman.  Lloyd was a life-long member of First Covenant Church in Duluth where he served on various committees as well as Church Chairman.  He was a graduate of Denfeld high School, a member of Gideons for many years and a member of Mark Christian Legion Post 558.  He was an Army veteran of WWII where he served in North Africa, Italy and France.  When he returned to Duluth after the war, he worked for a time as a salesman for Burroughs Adding Machine Co. before he married Shirley Swanson in 1946.  Together they bought the A&W franchise in Duluth where they operated 4 drive-ins until 1963.  Their first drive-in continues to operate today in Duluth’s West End as “A&Dubs”.  After 1963, Lloyd spent several years selling real-estate until Miller Hill Mall opened in the 1970’s.  He and Shirley then opened the KarmelKorn Shoppe in the Mall which they operated until their retirement in 1986.  For all those years they worked side by side, raised 2 children and continued to contribute to their church community.  In 1967 they also welcomed Mathy Esparza Moreno, a foreign exchange student from Peru into their family.  Mathy attended school and graduated from Denfeld with Cheryl in 1968.  They considered Mathy as their “third child” and always kept in contact.  Lloyd and Shirley traveled extensively, especially to Scandinavia to visit Swedish relatives, to several other European countries and to Peru to visit Mathy.  Lloyd was a hard-working, generous man with a kind soul and a keen sense of humor who was a friend to all.  He will be greatly missed by family and friends.  He was preceded in death by his wife, Shirley in 2016, his parents, a sister, Viola and two nephews. Lloyd is survived by son, Gary (Marilyn) Tillman of Spring Lake Park, MN; daughter, Cheryl (Brady) Reed of Redmond, WA; six grandchildren, Karen VanGuilder, Denise Selander, Scott Tillman, Matthew Tillman, Chris Reed and Justin Reed; 10 great-grandchildren; nephew, Morgan MacIntyre; nieces, Lorraine Erkkila, Leora Busch, and Marjorie McGreevy. The family wishes to thank the staff and caregivers at Benedictine Health Center Innsbruck for their care over the past 19 months where Lloyd was known affectionately as “Poppy”. Visitation 10 a.m. until the 11 a.m. funeral service Saturday, Sept. 16, 2017 at First Covenant Church. 2101 West 2nd St. Pastor Mark Kelly officiating. Military Honors accorded by the Duluth Honor Guard. Burial in Park Hill Cemetery. Memorials preferred to First Covenant Church or Gideons International would be appreciated.

To send flowers to the family in memory of Lloyd Tillman, please visit our flower store.