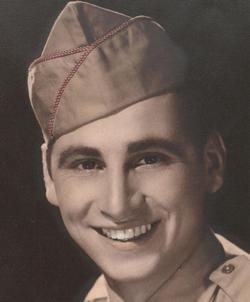 Louis James Marshall was born to James and Mary Marshall on July 4, 1922 in Duluth, MN and passed away peacefully at Diamond Willow Assisted Living in Proctor, MN in the early morning hours of October 29th, 2015. He was a 1940 Denfeld graduate and later served in the US Army in World War II. He was assigned to the 275th Engineer Combat Battalion and served in Europe including France, Belgium and Germany. Lou also bravely fought in the Battle of the Bulge. He was discharged from his military service in February 1946. After leaving military service he attended Duluth State Teachers College to pursue studies in Business Administration. In 1950 he was employed by the Miller-Wolh Company as manager of their Three Sisters store in Duluth. Lou also served as consultant and supervisor of several company stores in Minnesota and Wisconsin. He held this position for 24 years until the store was closed. He then became employed by the JC Penney store in Duluth until 1981 when he and his wife, Rita, moved to Burbank, California. He transferred to the JC Penney store at the Glendale Galleria and later to the store in Ventura, California. He retired in 1989. He and his wife moved to Mesa, Arizona where they resided until 1997 when they returned to Duluth. Lou held a lifelong membership in the Fraternal Order of Commercial Travelers and Joined AARP in 1984. He loved to read and coveted books, especially biographies and those having historical significance. He was always interested in books pertaining to World War II. Lou was fascinated by the backgrounds and lives of many national leaders and heroes. He often said he felt he shared a part of their past. Lou enjoyed watching sports, especially football and baseball and was always interested in seeing and reading about classic cars. Lou also loved music and seldom missed musical programs on TV. He enjoyed listening to the "Oldies" and could identify popular songs of the 30's, 40's and 50's as well as the singers and bands. He had a remarkable memory of places, people and events and enjoyed traveling to historic places and throughout the southwestern states. Lou was a loving husband and a devout Catholic. He was a member of St. Lawrence Catholic Church. Lou was preceded in death by 3 brothers, Robert Marshall, Joseph Marshall and John Marshall, and 2 sisters, Mary (Hank) Grand and Jane (Raymond) Spehar. Lou is survived by his sisters, Patricia (Edward) Boyer and Elizabeth (Leon) Gagne as well as many nieces and nephews. Visitation 10 until the 11 a.m. Mass of Christian Burial Monday, Nov 2, 2015 at St. Lawrence Catholic Church. 2410 Morris Thomas Road. Rev Fr William Fider officiating. Burial at Sunrise Cemetery . Military honors accorded by the Duluth Combined Honor Guard. To sign the guest book on-line, visit www.wlbfuneralhome.com. Williams Lobermeier Boettcher Funeral Home is entrusted with final care.

To send flowers to the family in memory of Louis Marshall, please visit our flower store.