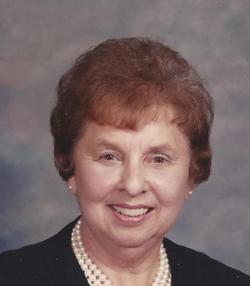 Louise M McCaffrey, of Duluth, died Tuesday October 11, 2016, with family by her side. She was born June 10, 1924 to William " Frank" and Mary Kaptonak in Superior WI. Louise graduated from Central High School in Superior. She married Robert Walkowiak in 1953 until his passing in 1972. Later in life Louise married Albert McCaffrey in 1980. Louise worked as a bookkeeper in both Superior and Duluth, retiring from her teller position at US Bank in 1981. Louise was a longtime member and supporter of Holy Family Catholic Church where she spent many hours of volunteer time. Louise enjoyed the many clubs she was a member of, including, Slovenian Ladies Aux, Altar Society of Holy Family, Polish Ladies, and the Rosary Society. Louise also loved to travel and see new exciting places, but Louise's greatest joy were her two granddaughters which she devoted her life to. She was proceeded in death by her parents; two brothers, John and Conrad Kaptonak, her husband Robert Walkowiak in 1972 and her husband Albert McCaffrey in 1995. She is survived by her son Tom (Deanna) Walkowiak of Superior; her granddaughters Heather and Missy Walkowiak, brother Donald(Ethyl)Kaptonak, IL., and numerous extended family. Visitation 10AM until the 11AM Mass of Christian Burial Monday Oct 17, 2016 at Holy Family Catholic Church, 2430 W. 3rd St., Duluth. Burial at Polish Catholic Cemetery. Memorials to the Holy Family Maintenance Fund, in care of the family, are appreciated. Williams-Lobermeier-Boettcher Funeral Home is entrusted with final care.

To order memorial trees or send flowers to the family in memory of Louise McCaffrey, please visit our flower store.