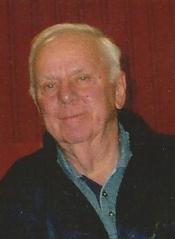 Lyle Clarence Carlson, born August 27, 1931, to Arthur Clarence Carlson and Palma (Moen) Carlson, died September 7, 2012, on the Carlson property in Hermantown, MN. He graduated from Hermantown High School in 1949, where he played on the school's first hockey team. On October 17, 1959, he married Marion Berggren. He worked for the DM&IR until 1968, when he joined his father in truck farming and farmers' market and went on to own and operate Carlson Florist & Greenhouse until 1983. He was a member of the Duluth Gospel Tabernacle for 52 years, serving as usher and Sunday school bus driver, where he met many children who looked forward to seeing him every week. Lyle was an active member of the Hermantown Historical Society, where he provided detailed information about the early Town of Herman, truck farming, and lumber industry in the area. He was proud to be an American, served in the Korean War, and was an active member of the Veterans of Foreign Wars Post 137, where he served as vice commander for several years, selling poppies for eight years until his illness in 2011. Lyle participated in the Gideon's for 42 years and enjoyed distributing testaments to schools and colleges and Bibles whenever he could. One of his favorite hobbies besides his flower gardens by the house was bowling. He bowled on a league with fellow church members for many years, and continued the sport on the Wii with his wife in later years. Also a history and geography buff, he often got trivia questions correct and supplied answers to his children's homework. Above all, Lyle was a family man, a devoted and caring father who would give the shirt off his back for any of his children in need. He also spent many hours with his grandchildren, driving them around in his blue Ford truck and visiting every hockey rink in the Twin Cities. All of his six grandchildren loved his special pancakes and bacon breakfast. Lyle is preceded in death by his parents and older brother, Don Carlson. He is survived by his wife, Marion; his son, Jeff (Sharon) of Woodbury, MN; his daughter Dori Carlson of New York City; his twin daughters, Sally Ruble (Rick), also of Woodbury, MN, and Mary Chantland (Loren) of Minneapolis; his grandchildren Joshua Carlson, who will be married in Finland on Sept. 22, 2012, and Jenna Battle (Karl) of Fort Bragg, NC, and their two children, Kylie and Jordan; Annika and Korrina Chantland, and Kaylee and Nick Ruble. He is also survived by a sister, Lorraine Carlson (Don Shepard) of Superior; brothers Bob (Barbara) Carlson of Hermantown; Roger (Joanne) Carlson of Proctor; Lloyd (Charlotte) Carlson of Superior; a sister-in-law, Doris Skorich of Duluth; brother-in-law Chet Berggren of Wisconsin, and many cousins and special friends. Visitation will be from 10 a.m. until the 11 a.m. funeral service Tuesday, Sept 11, 2012 in Duluth Gospel Tabernacle, 1515 West Superior St. Rev Rolf Fure officiating. Burial in Hermantown Cemetery accorded by the Duluth Combined Honor Guard. To sign the guest book on line, visit www.wlbfuneral home.com. Arrangements by Williams Lobermeier Boettcher Funeral Home.

To order memorial trees or send flowers to the family in memory of Lyle Carlson, please visit our flower store.