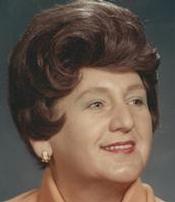 She graduated from Proctor High School in 1939. She married Edgar Skog on June 20, 1942 and lived on the family farm in Munger for the next 60 some years. Besides farming, Munnie also worked as a trucker for many years and also owned and operated Skog's Greenhouse and Floral. In later years she was a realtor with Sorenson Realty,working in the Cloquet area.

She was a member of Bethlehem Lutheran Church in Proctor from the age of seven and of the many capacities she served in, singing in the choir was her favorite. She also sang in the American Legion Choir for over 25 years.

Munnie is preceded in death by her parents Hugo and Anna Collander; husband Edgar; sisters Bernhild Schinn, Alfhild Berglund and Swanhild Pearson and her brothers Alf and Alvin Collander.

To send flowers to the family in memory of Magnhild Skog, please visit our flower store.