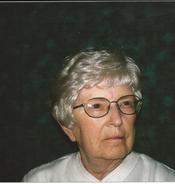 Marian B. Holte passed away on June 27, 2012 at 9:00 AM in Essentia Hospice, Duluth at the age of 83 due to declining hemoglobin, pneumonia, and infection. Marian was born in Duluth on May 28, 1929 to Arthur and Elsa Erickson. She was the third of five children. Her brother Donald died at a young age so Marian grew up with her sisters Virginia, Donna, and Carol. She graduated from Denfeld High School and went on to get her Nursing Degree from St. Luke's to become a Registered Nurse. She met her future husband Dan at Schultz Lake when they were teenagers. While Marian was finishing nurses training, Dan was stationed in England while serving in the Air Force during the Korean war. They were married in Duluth in 1953 when he was being transferred to Ellsworth Air Base near Rapid City. After he left the service, Marian and Dan moved to Mpls. She worked at Mt. Sinai Hospital when they first came to Mpls. She worked as an RN in Rapid City, Minneapolis, Elk River, Robbinsdale, and Luverne. Her most demanding work was in ICU at North Memorial Hospital. After working at North Memorial, Marian and Dan left the Twin Cities area to run a motel in Luverne called The Cozy Rest. After running the motel for eighteen years , they retired and moved to a new retirement home on Fish Lake north of Duluth. At the time of her retirement in 1994, Marian had worked as a nurse for 40 years. Marian traveled a lot on family camping trips with her husband and son. She saw most of the states in the lower forty eight and she went to Hawaii with her husband to experience Oahu and Maui. Marian enjoyed eighteen years of retirement at their home on Fish Lake, however, she had to struggle back from several health problems including two limited strokes and one heart attack from which she fully recovered. She had the heart attack on December 26, 2004 and she survived because Essentia put five stents into her coronary arteries. These stents extended her life by seven and one half years. She is survived by her husband Dan, and her son Mark, her sisters Donna Reimer and Carol Fanaselle, as well as many nieces and nephews. A special thank you is extended from our family to Essentia for giving her over seven extra years to enjoy and for excellent hospice care. She was an excellent wife and mother who will be deeply missed. Visitation 1:30 PM until the 2:30 PM Memorial Service Monday, July 2 at Williams-Lobermeier-Boettcher Funeral Home, 3208 W 3rd St., Duluth. Burial will be at Fort Snelling National Cemetery.

To send flowers to the family in memory of Marian Holte, please visit our flower store.