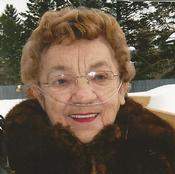 Marilyn A. (Tafs) Bronikowski, 78, of Duluth went home to be with the Lord on August 16, 2012. She was born in Duluth on April 15, 1934 to Ernest and Jenny (Arnson) Tafs. She graduated in 1952 from Hermantown High School, married Robert Bronikowski in 1954 and they had three children together. She attended Duluth Business University and worked for the Duluth Transit Authority for 20 years before retiring in 1996. Marilyn enjoyed a good laugh, a funny joke and loved playing a prank on someone - or having one played on her. She was always the first one to get on the floor and play with the grandchildren or great-grandchildren. She is preceded in death by her parents, brother Gerald Tafs, and son Greg. She is survived by daughter Barb (Richard) Gooderum of Baudette MN, son Bob Jr.(friend Lori), of New Lisbon WI, grandchildren Stefanie Baca, Jeff (Lori) McCorison, and Bob's girls Amy and Jessica; 10 great-grandchildren; sister Claudia (Bob) Busch of Hermantown; many nieces, nephews and cousins; many good friends and her many friends at Aftenro. She will be greatly missed. A celebration of life will be held at Williams-Lobermeier-Boettcher funeral home on August 25, 2012 at 2PM. Anyone planning to attend can prepare to hear and share a joke or funny story in Marilyn's honor.

To send flowers to the family in memory of Marilyn Bronikowski, please visit our flower store.