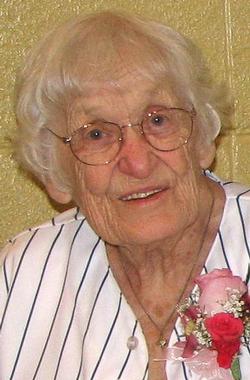 Marion A. DeWitt, 95, a lifelong Duluth resident, passed away in her West Duluth home on Thursday, March 19, 2015, with family and friends at her bedside. Marion was born in Duluth on June 9, 1919, to Charles and Annie Addison. She graduated in 1937 from Wrenshall High School and in 1939 from Duluth State Teachers College. She began her teaching career in a one-room schoolhouse in Holyoke, MN. On February 19, 1943, she married Donald L. DeWitt, and moved to Mora, MN where she continued teaching at Little Ann & Hamilton School houses. They had two farm-kids, Dave & Debby, and then in 1953, they moved to Duluth, where they had two city-kids, Donny & Donna. Marion taught school in Duluth until she started working at Duluth Avionics Corporation. In 1968 she was hired as a supervisor for disabled workers at the Duluth Sheltered Workshop. In 1980 the Workshop merged with Goodwill, where she retired in 2012 after 34 years with the same organization. Marion was an active member of Westminster Presbyterian Church, and served as deacon, Sunday school teacher and a long-time member of the Mary Circle. She was very involved with her children's Cub Scouts, Boy Scouts, and Campfire Girls, serving as a Den Mother for each of them. Marion was a dedicated Minnesota Twins fan who rarely missed a game on TV, and attended her last live home game when she was only 90. She enjoyed walleye fishing with her family, and spent many hours on the St. Louis River and Northland lakes in the family boat with her husband, children and grandchildren. She was always working with her kids on some cool craft project, or enlisting family members to work on some of her many ingenious and creative ventures. She loved painting water-colors of Northland scenery and nature, and became a quite accomplished painter. Marion was preceded in death by her husband, Donald L. in 1981; and special son-in-law, John Beaudin in 2008. She is survived by her children, David, Debby Beaudin, Don, Donna Mankowski (Tom Zimmeth), 5 granddaughters, 7 great-grandchildren and one great-great granddaughter. The family would like to thank Marion's very special neighbor, Barb Fuller, who has been a long-time friend, "adopted daughter", and her dedicated caretaker for many years. There were also some very special caregivers at the Franciscan Health Center who devoted their time and special attention to Marion. Finally, the family would like to express their sincere gratitude to the wonderful folks at St. Luke's Hospice for the care, guidance and kindness given to Marion and her loved ones during her final days. A memorial service will be held 2:30 P.M. Sunday, May 3, 2015 in Our Savior's Lutheran Church, 4831 Grand Ave. Visitation one hour prior to the service. Reception to follow in fellowship hall. Arrangements by Williams Lobermeier Boettcher Funeral Home.

To order memorial trees or send flowers to the family in memory of Marion DeWitt, please visit our flower store.