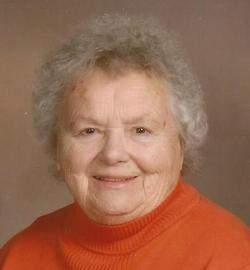 Marion Helena Shannon, 86, of Proctor, MN passed away peacefully at home on Sunday, April 3, 2016 surrounded by her family. Marion was known by all for her kindness and her faith. She was born on September 20, 1929 in Duluth, MN, to Albin and Martha (Hummel) Mattson. She graduated from Proctor High School and Lutheran Bible Institute in Minneapolis, MN. She attended St. Luke's School of Nursing for one year before returning home to help care for her younger brothers and sisters after her mother died unexpectedly. Marion married John L. Shannon in Duluth on September 8, 1957. She worked at Nopeming Nursing Home as a certified nurse aide for over 20 years. She was an active member of Salem Covenant Church in Duluth and was in the choir, Willing Workers, and the Martha Circle. She made lifelong friends through the TOPS chapter in Esko. She enjoyed her family, reading, singing, playing Scrabble, and rummage sales. She was preceded in death by her parents Albin and Martha, her husband John, siblings Arlene, Frank, and Carol, granddaughter Rachel, and son-in-law Jerry Fasnacht. She is survived by her children Colleen Fasnacht of Proctor, Carin (Vular) Harris of Aurora, CO, Brian (Lynnette) Shannon of Esko, Mary (Dennis) Comrie of Carlton, and Kathleen (Danny) Schafer of Saginaw, MN; siblings Ruth (Bud) Nelson and Anna (Richard) Prentiss of Fairbanks, AK; Carl (Cathy) Mattson of Proctor; Byron (Sandy) Mattson, and Berit (Jim) Froehlich of Duluth, MN, John Mattson of AZ, as well as sister-in-law Barbara (Frank) Mattson; nine grandchildren, six great- grandchildren, and many beloved relatives in Kronoby, Finland.

Visitation 5 to 7 pm Wednesday, April 6, 2016 at Williams Lobermeier Boettcher Funeral Home and will continue Thursday from 10 until the 11 am celebration of Marion's life at Salem Covenant Church, 339 North 59th Avenue West, in Duluth, MN, with Pastor Dave Peterson officiating. Burial in Augustana Lutheran Cemetery in Midway Township will occur at a later date. Memorials to Salem Covenant Church Missions would be appreciated. To sign the guestbook online, visit www.wlbfuneralhome.com. Williams Lobermeier Boettcher Funeral Home is entrusted with final care.

To send flowers to the family in memory of Marion Shannon, please visit our flower store.