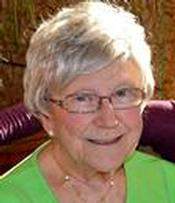 Marlene Alvera Royseth, 78, of South 63rd Ave West, died Monday, December 9, 2013 in the Solvay Hospice House surrounded by her family. She was born on August 26, 1935 in Duluth to John and Alvera Gunderson. She worked for the Board of Education ISD 709 for five years. After marrying Herman Royseth on September 28, 1956 in Duluth, she left the school district to raise her family. Marlene was a woman of great faith. She was an active member of Grace Communion International Church. Her strong faith carried her and her family through her journey to peace and glory. Marlene enjoyed crossword puzzles, Jumble, sewing, crocheting, and knitting. She created blankets which were donated to the military thru the Soldiers Angels Program and creating mittens which were the best and warmest according to her children. She loved her family and friends, always making everyone feel special and welcome. She was lovingly called "Mary Poppins" by her children. She was preceded in death by her parents. She is survived by her husband, Herman; three daughters, Susan (Russ) Grover of Carlton, Minn, Sandra (Ben) Manley of Duluth and Rhonda (Mike) Oland of Tenn; a son, Mark of Big Lake, Minn; a sister, Diane (Donald) Thompson of Duluth; two brothers, Donald Gunderson of Duluth and Duane (Gail) Gunderson of Cedar Rapids, Iowa; 12 grandchildren and three great-grandchildren. The family would like to thank the entire "Loving and kind" staff at Solvay Hospice House for their care of Marlene and her family. A gathering for friends and family will be from 5 to 7 p.m. Wednesday in Williams Lobermeier Boettcher Funeral Home. Private family services will be held on Thursday. Burial in Oneota Cemetery. Memorials to the Solvay Hospice House would be appreciated.

To send flowers to the family in memory of Marlene Royseth, please visit our flower store.