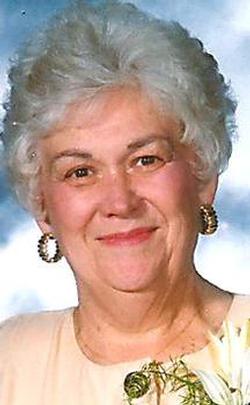 Mary Ann Olsen, 85, died Friday, Nov. 20, 2015 at Ecumen Lakeshore. Mary Ann was born Oct. 6, 1930 in Duluth, to Louis and Lillian (Johnson) Clement. She graduated from Proctor High School. Mary Ann worked at Western National Bank for several years and Eastern Airlines. In 1953, she married Wayne C. Olsen. Mary Ann was a member of First United Methodist Church and its Rachel Circle; Honored Ladies Club of AAD Temple Shrine; and was a life member and past president of the Volunteer Guild at St. Luke's Hospital. She enjoyed entertaining, reading, traveling, sewing, knitting, needlepoint and spending time with family and many special friends. She was preceded in death by her husband, Wayne in 1994 and a brother, Thomas in 1994. Survived by one daughter, Katherine (James) Harris; four sons, Warren (Veronica) Olsen, Allan (Char) Olsen, Kenneth (Mechelle) Olsen, Steven (Ericka) Olsen; nine grandchildren and six great-grandchildren. In addition, she is survived by a sister, Ruth (Bill) Miller; brother in law, David (Peg) Olsen and several nieces and nephews. The family wishes to thank the staff at Ecumen Lakeshore for the care and kindness extended to our Mom and family. VISITATION: 4 to 6 p.m. Friday, Nov. 27, in Williams Lobermeier Boettcher Funeral Home and will continue from 10 a.m. until the 11 a.m. funeral service Saturday, Nov. 28 in First United Methodist Church. Burial will be at Forest Hill Cemetery. Memorials are suggested to First United Methodist Church or to the Shriners Hospitals for Children.

To send flowers to the family in memory of Mary Olsen, please visit our flower store.