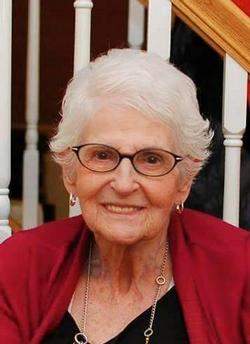 Mary Elizabeth Pederson, 90, of Duluth, went to join her husband in the arms of Jesus on Wednesday, July 22, 2015 at Edgewood Vista surrounded by her family. She was born in Ely, MN on November 16, 1924 to Edward B. and Emma W. Curnow. Mary graduated from Ely High School and attended Vermilion Community College. She worked for the Department of Defense in Washington D.C. during World War II. She returned to Ely and married Raymond Pederson on June 21, 1947. They moved to Duluth and started a family. She worked at St. Mary's Hospital and then the U.S. Steel Plant as a secretary during its shutdown. Mary was a member of the Christian women's Club and the Son Seekers Ministry. She loved spending time with her family, especially her grandchildren. She was preceded in death by her parents; her husband, Raymond; three brothers, Edward, Clayton and Kenneth Curnow; great-granddaughter, Hannah Lattanzio. She is survived by her daughters, Winnie (Kendall) Fermenich, Debbie (Thomas) Houle and Mary (Jim) Morgan all of Duluth, Kim LeBoeuf of Farmington, MN; sons, Kevin (Phyllis) and Ross(Wendy) both of Duluth, Paul (Kelly Jo) of Superior; 18 grandchildren, 31 great-grandchildren and one on the way; three great-great-grandchildren and one on the way; and many nieces, nephews and friends. Memorial Service 3 P.M. Sunday, July 26, 2015 at Hermantown Community Church, 4880 Maple Grove Road.

To send flowers to the family in memory of Mary Pederson, please visit our flower store.