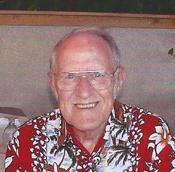 Merril D. Hendrickson, 87, Duluth, went to be with his Lord and Savior July 5, 2013. He was born in Duluth on July 29, 1925 to Bernard and Hilda Hendrickson. He was a graduate of Central High School. He was a Navy Veteran of WWII. Merril had worked for the Northern Pacific Railroad, and Burlington Northern Railroad for 43 years, starting as a fireman and retiring as an Engineer. He was a member of First Covenant Church, Ionic Masonic Lodge #186, Scottish Rite Bodies, The AAD Temple Shrine, Proctor Moose Lodge #1302, the Mark Christian American Legion Post #558 and NARV. He was preceded in death by his parents, first wife Evonne in 1971, second wife Agnes in 2007, and brother John. Merril is survived by his children, Shirley(Tom)Balgaard, Dululth, Sharon Pryatal, Mpls, Richard(Beth)Lawton, OK, Donald(Karen), Sierra Vista, AZ, Sheila(Joe)Crain, Milaca, MN, Linda(Carl)Macioce, Hermantown, Joyce(Ron)Mattson, Cloquet, Robert Myllyma, Lakeworth, FL, sisters, Evelyn Klatt and June Kirby of Duluth and many grandchildren and great-grandchildren. Visitation Sunday 3-5 PM at Williams-Lobermeier-Boettcher Funeral Home and continues from 10 AM until the 11 AM Funeral Service Monday, at First Covenant Church, Duluth. Burial at Park Hill Cemetery. Memorials to First Covenant Church and the Alzheimers Society, in care of the family preferred. Arrangements by Williams-Lobermeier-Boettcher Funeral Home.

To order memorial trees or send flowers to the family in memory of Merril Hendrickson, please visit our flower store.