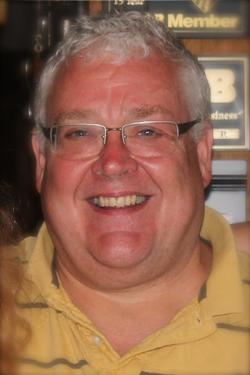 Simonson was born in Duluth on Sept. 10, 1957, the son of Dan and Marlene Simonson. He grew up in the Piedmont Heights neighborhood, attending Denfeld High School where he first developed his love of journalism while working for the school newspaper. He continued his journalism studies at UW-Superior where he earned his degree in political science with an emphasis in journalism.

Mike's early work in Duluth led him to major market stations in Georgia and North Carolina. Once, this Northern Minnesota Yankee infiltrated a Ku Klux Klan meeting to report from inside the organization with nothing more than a pencil to defend himself. Before long, however, he was called back home to the Twin Ports, where in 1990 he accepted a position as northern bureau correspondent for Wisconsin Public Radio at KUWS-FM in Superior. A few years later he met and married his beloved wife, Jennifer.

Mike was big man with a big voice and a big heart. He almost never yelled, but his talking sometimes sounded a lot like yelling, which motivated colleagues and students alike to do things previously believed impossible.

Mike's contributions to journalism speak for themselves: He won numerous national awards but took far greater pride in awards won by his students which now line the walls of the KUWS studios. Public affairs programs like "Final Edition" and "Radio Superior" are indelibly woven into the Twin Ports media. He'll be most remembered by his family, friends and hundreds of former UW-Superior journalism students as a tough, compassionate teacher who empowered young reporters to stand up for themselves, ask questions and write with tenacious respect for the truth.

As a teacher and editor, Mike took 30-word sentences and made them 12-word bulldozers. He'd call you into the studio, ostensibly property of the radio station, but his de facto empire of reel-to-reel tape and scripts, each one always printed in Comic Sans because it was such a terrible font that it made you read slow and deliberate like Edward R. Murrow. A generation of reporters, shaped by his influence, work across the country, especially in Minnesota and Wisconsin.

Mike was a member of Our Savior's Lutheran Church, the Figley Field Institute and the Raleigh Street Press Club.

Mike was preceded in death by his reel-to-reel machine, with which he is presently rejoined in a place lit well by unending truth. He is also preceded by his parents, sister, Bonnie Simonson, nephew, David Grimm, niece, Teresia Grimm and uncle, Dan Hagberg.

He is survived by his wife, Jennifer, his partner in life, love and work. He is also survived by a brother, Mark Simonson; a sister, Dianne (Craig) Edgett; nieces, Beckey Simonson and Regina Joramo; a nephew, Ben (Emily) Grimm; and numerous colleagues and students.

Visitation 5 to 7 p.m. Friday and from 10 until the 11 a.m. Memorial service Saturday all at Our Savior's Lutheran Church, 4831 Grand Ave. Rev Christine Anttila officiating. Burial in Oneota Cemetery.

Memorials are preferred for a scholarship fund in Mike's name. This will be set up to promote the art of long-form investigative journalism. To make a gift to this scholarship fund, mail a check to the family or to Wisconsin Public Radio, 821 University Ave, Madison, WI 53706 with a notes that it is in memory of Mike Simonson.

To send flowers to the family in memory of Mike Simonson, please visit our flower store.