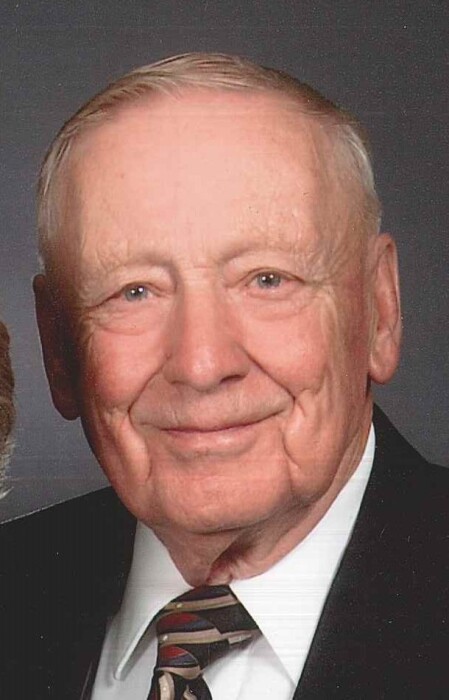 Milton was born on September 17th, 1928, in Seattle, WA., to Henning and Martha Sundquist, who emigrated to the United States from Sweden.  Milt was a graduate of Hermantown High School and married the love of his life, Ivah Finseth, in 1951.  Milt was extremely involved in the community.  He was a past member of the MN Banker’s Association, St. Louis County Extension Board, Kiwanis of Friendly Duluth, Bethany Cemetery Board, and past committees at Salem Lutheran Church of Hermantown and First Lutheran Church of Duluth, just to name a few.  Milt retired from U.S. Bank in 1994 as Vice President of Correspondent Banking.  It was a job he loved and enabled him to travel and meet so many wonderful people and make life lasting friendships.  To know Milt was to be his life-long friend.  After “retirement”, Milt worked parttime for Williams Lobermeier Funeral Home and Payroll Processing of Duluth. Milt lived and proudly raised his family on the land his father homesteaded in the 1920’s.  With his father, Henning, they began the Pineknob Tree Farm, which to this day, was his pride and joy.    Milt was preceded in death by his parents, his wife, Ivah, and his four Labradors, Max, Matt, Sam and Nyla.   Milt is survived by his children, Paul of Hermantown, Mary (Dave) Miller, of Hermantown, Chuck (Jim Sontag) of Chicago and Ann (Doug) Melander, of Duluth; his grandchildren Kristen Lease, Michael Reedy, Scott Miller, Andrew and Jonathon Melander, Paige Wegner, Phillip and Stewart Melander; great-grandchildren, Adriana, Ellsie and Emilia, many nieces and nephews and Laura Holt.   A very Special thank you to Essentia Hospice, especially Therese Swanstrom CNP, and the staff at Benedictine Health Center for their compassionate care.

To order memorial trees or send flowers to the family in memory of Milton Sundquist, please visit our flower store.