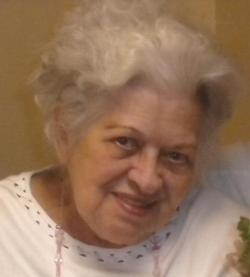 Miriam J. Anderson, age 89, went to meet her Lord on March 14, 2014. She was born Miriam GeorgeJean Olsen to Edwin and Ophelia Olsen in Duluth on October 8, 1924. She married Paul G. Anderson on October 18, 1941 and spent 3 years in Chicago while Paul was on the Aircraft Carrier the USS Wolverine. In Chicago she worked for Motorola Radio. When they moved to Duluth, Miriam worked at Western Electric, Duluth Avionics and retired from the Montgomery Ward Catalog Dept. She was a member of Asbury Methodist Church and its Bible Study Group. Miriam enjoyed dancing, bowling, growing flowers, playing cards and board games with family and friends and helping at church. Miriam lived in her home for 54 years before residing at the Lenox and then at Keystone Bluffs. She finished out her days at Solvay Hospice House where she had the pleasure of meeting many kind and caring friends and caregivers. Many special thanks to all those who cared for her at Keystone and Solvay. You are all very wonderful people. Miriam is preceded in death by her parents, husband, brothers Raymond and Kenneth and sister Hazel. She is survived by her sons David(Kathey) and Robert(Marlene), daughter Debra Kolden, 8 grandchildren and 4 great-grandchildren. Visitiation 10:00 AM until the 11:00 AM Memorial Service Friday, July 25, 2014 at Asbury United Methodist Church. Arrangements by Williams-Lobermeier-Boettcher Funeral Home.

To send flowers to the family in memory of Miriam Anderson, please visit our flower store.