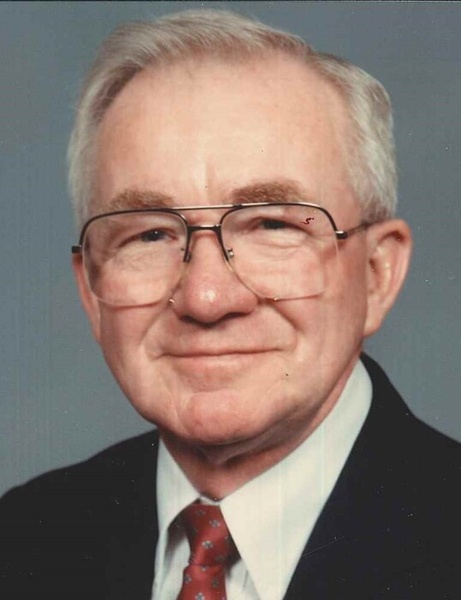 Murdeth “M. George” Downs, 93, of Duluth, passed away on Monday, October 4, 2021. M. George was born in Duluth on June 12, 1928 to Dewey and Elvera Downs. He was born on a couch in his parent’s home and given the moniker “Murdeth” after an uncle, but he was more often referred to as “Tut” by his friends. He attended Longfellow Elementary and West Junior prior to Denfeld, where he graduated in 1946. He later attended the Area Vocational Technical School and University of Minnesota Duluth. He married Barbara A. Hay on June 28, 1952 in the former Central Avenue United Methodist Church in Duluth. M. George grew up during the Depression and knows well how many families had to make do with little or do without, but his family somehow survived. Working the family garden was a necessity and he remembers playing in the streets with make-do equipment and swimming in the dammed up creek for fun. He was employed by the Duluth, Missabe and Iron Range Railway for 38 years, beginning as a laborer, pipefitter and electrician, retiring as assistant manager of the ore docks and storage facilities operations.  M George also spent time at the Morgan Park Taconite facility during its re-building years. He spent 16 years on the State Board of Electricity and was a business agent for the International Brotherhood of Electrical Workers. He almost became an international representative for the IBEW in Chicago, but came back to Duluth. After church one Sunday in 1966, Tom Bell II asked him to run for the school board. He did, but lost as Murdeth George Downs. Going “Ivy League,” as he says, he was elected in 1967 as “M. George Downs” and served 10 years, five as chairman. He had to work on the opposite side of negotiations than he had as a union rep. Among his accomplishments were improvements to Morgan Park School, including the swimming pool. He was active in the Euclid Masonic Temple, the Scottish Rite, the Shrine, Royal Arch Masons and Asbury Methodist Church. After retiring from the railroad he looked for a new political challenge and ran for the fifth-district Duluth City Council seat. He won and served 12 years. In 1986 his briefcase was mistaken for a bomb when he left it in the Duluth Civic Center. It was blown up by police. Downs was an original member of the Duluth Economic Development Authority, which works to attract and improve businesses like Northwest Airlines, Cirrus Design, Spirit Valley Shopping Center, United Health Care, the Duluth Paper Mill, recycling facility in West Duluth, Stoneridge Shopping Mall, renovations to the Duluth Entertainment Convention Center, the Canal Park district, and I-35 freeway extension. He was known for using the West Duluth Perkins as his “office” and had the reputation as someone a constituent could communicate with and get an answer. Downs was co-chair of the committee to rebuild Public Schools’ Stadium and also co-chair of the committee to push for the new Amsoil Arena. He had a reputation as a negotiator, a conciliator and a compromiser who gets results. He was preceded in death by his parents; siblings, Dewey Jr, Norman, Barbara Stauber, Burrel and Lynn Bishop; two grandsons, Andy Downs and Steve Samberg. He is survived by his wife, Barbara; two sons, George (Patricia) and Peter (Kathy); three grandchildren, Nicholas (Keley), Thomas (Elizabeth) and Stephanie (Joe) Husmuller; 15 great-grandchildren; a sister, Midge (John) Peterson; a brother, John and a sister-in-law, Claire Downs. Visitation 12 noon until the 1 p.m. funeral service Monday, October 11, 2021 at Asbury United Methodist Church. 6822 Grand Ave. Pastor Katherine Cornell officiating. A Masonic service will be held at 12:30 pm. Burial in Oneota Cemetery. The service will be live streamed, please visit, https://youtu.be/jwmQiPYfyms. Masks will be required for attendees. Arrangements by Williams Lobermeier Boettcher Funeral Home.

To send flowers to the family in memory of Murdeth "M. George" Downs, please visit our flower store.