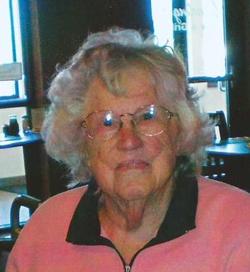 Norma Jean (Brown) Eckenberg, 91, of Edgewood Vista, formerly of North 40th Ave West, passed away peacefully Saturday, February 20, 2016 in St. Luke's Hospice. Norma was born on August 23, 1924 to William and Bertha (Olson) Nelson in Duluth. She was a 1942 graduate of Denfeld High School and a member of Zion Lutheran Church. She had worked for Traveler's Insurance Co in Duluth and at St. Ann's Residence. Norma was a past worthy matron in Eastern Star, and was noted for being an excellent cook who when called upon could put together a feast for 20 or even more at a moment's notice. She made an instant friend of everyone she met. After being widowed, she reconnected with fellow Denfeld classmate, Lawrence Eckenberg, they married and spent over 25 happy years together. With Norma's two boys and Larry's son and daughter, their extended family grew with grandchildren from both families. They were always active together traveling, loved dancing, working on Denfeld reunions and attending WE Fest in their camper. They volunteered delivering meals to shut-ins and visiting nursing homes with treats. She was preceded in death by her parents; husbands, Ralph L. Brown and Lawrence Eckenberg; a son, Bruce Brown and brother, Donald Nelson. She is survived by her son, Bryan F. (Cathy) Brown of Duluth; a brother, Dr. John D. Nelson and spouse, John Savage of Dallas, TX; a granddaughter, Genevieve Brown of Grand Haven, MI; several nieces and nephews in Westerville, OH. Private family services will be held. Burial in Park Hill Cemetery. In lieu of flowers, please remember a moment you shared with fun, bubbly Norma. To sign the guestbook on-line, visit www.wlbfuneralhome.com. Williams Lobermeier Boettcher Funeral Home is entrusted with final care.

To send flowers to the family in memory of Norma Eckenberg, please visit our flower store.