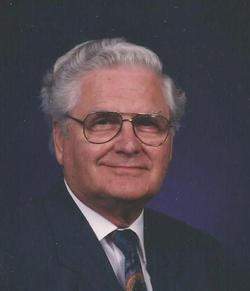 Omar John Ellefson, 91 years old, went to be with the Lord on Wednesday, October 14, 2015 at the Benedictine Health Center. Omar was born to John and Mary (Lee) Ellefson at home in Proctor, Minnesota. He attended school in Proctor and at the age of 18 he began working for the DM&IR Railway in Proctor. He worked as a materials management supervisor for the DM&IR Railway until his retirement in 1984. He joined the Army in 1943 and was a WWII veteran. While serving in Europe, specifically Normandy, France, he was wounded in action at the age of 19, earning a Purple Heart metal. After the war, he returned to Duluth, Minnesota and married his sweetheart, Ruby Lindquist soon after on June 15, 1946. They enjoyed 69 years together. They raised four children and lived in Duluth their entire married life. Omar was active in many ways at his church. He attended the Duluth Gospel Tabernacle all his life, served on the Trustee Board there, taught Sunday school, was on the Mission Board, and played his bass fiddle in the orchestra. His sense of humor was a wonderful part of his personality. He often would tease and use puns and subtle humor, with a twinkle in his eye, and catch many off guard. His wife, children, grandchildren, great grandchildren and great-great grandchildren were the love and pride of his life. His strong faith was very important to him and he impacted many over the years. He was preceded in death by his parents, John and Mary Ellefson, two brothers, Ellwood (Rose) Ellefson, Rodney (Judy) Ellefson, a son, Bruce Ellefson, and grandson, Steven Sommerfeld. He is survived by his wife Ruby Ellefson, three children, Joanne (Paul) Blomdahl, Susan (Daniel) Sommerfeld, Diane (Glen) Grindahl, 12 grandchildren, 25 great grandchildren, and 5 great-great grandchildren. The family would like to thank Primrose Retirement Community for the wonderful care and attention given to our Dad and husband. We would also like to thank the staff on 5 West at St. Luke's Hospital for their excellent care during his recent hospitalization and thank the Benedictine Health Center staff for caring for him during the last 5 days of his life. Visitation 4 to 6 p.m. Sunday, October 18, 2015 in Williams Lobermeier Boettcher Funeral Home and will continue from 10 until the 11 a.m. funeral service Monday at the Duluth Gospel Tabernacle, 1515 West Superior Street, Duluth, Minnesota. In lieu of flowers the family requests any donations be sent to the Duluth Gospel Tabernacle toward their building project. To sign the guestbook on line, visit www.wlbfuneralhome.com. Williams Lobermeier Boettcher Funeral Home is entrusted with final care.

To send flowers to the family in memory of Omar Ellefson, please visit our flower store.