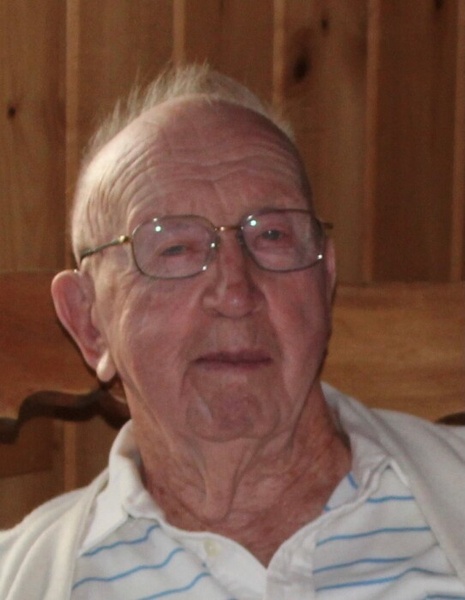 Orien C. Olson, 99, of Duluth, MN died peacefully January 1, 2021, while living at Edgewood Vista Assisted Living. He was born in Duluth on September 7, 1921, to Julius and Annette (Sather) Olson. He was a graduate of Denfeld High School. After high school he found work in the CCC, Civil Conservation Corp. where he planted trees along the North Shore of Lake Superior. He then moved on to work for Columbia Transport Shipping on the Great Lake Boats until joining the Navy in World War II. He served on the USSPC 1120, which was a sub-chaser until the end of the war. He then joined the Naval Reserves and was called back for the Korean War, serving on the aircraft carrier, Princeton. Upon return from World War II, Orien attended Dunwoody Institute and graduated as an electrician. After a short engagement he was united in marriage to Caroline E. Brand on December 14, 1946. They were happily married until Caroline went home to be with the Lord on March 16, 2005. He was a God loving man and member of Christ Lutheran Church in Piedmont Heights. Orien worked at US Steel as an electrician until the Duluth plant closed in 1971. He then continued to work as an electrician in Duluth and the surrounding area until his retirement. Orien also owned apartment buildings in Duluth which kept him very busy. In his spare time he enjoyed playing golf, card games, dabbling in the stock market, camping, fishing, picking blueberries and spending time outdoors. Orien was always willing to lending a hand, helping out wherever he could. He volunteered in his community working with the United Northern Sportsman Club, ringing the bell for the Salvation Army, and was always working with friends and family on various projects. Orien was a devoted father to Jan (Curt) Olson. He enjoyed spending time with his grandchildren, Jess (Matt) McGurn, Jake (Brittany) Olson and Brittaney (Brian) Devane. Because of his 99 years of longevity he also got to enjoy his 8 great grandchildren, Jackson, Mason and Ysa McGurn, Collins and Rylie Olson, and Harrison, Oliver and Theodore Devane. Orien was preceded in death by his parents, Julius and Annette (Sather) Olson; his sister, Myrtle and his brother-in-law, Harold Jacobsen. He is survived by his daughter, Jan (Curt) Olson who loved him with her whole heart. A special thank you to Caring Edge Hospice Care, his nurse Amanda, and all of the staff at Edgewood Vista Assisted Living. A private service will be held with Orien’s immediate family to honor his life. Arrangements by Williams Lobermeier Boettcher Funeral Home.

To send flowers to the family in memory of Orien Olson, please visit our flower store.