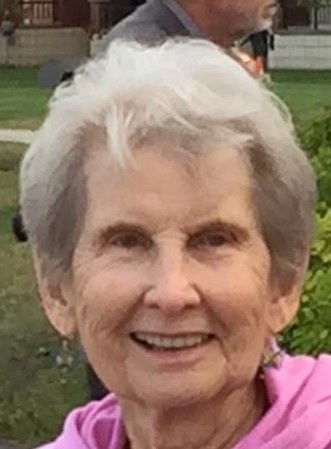 Patricia R. Nelson, native Duluthian, died Thursday November 15, 2018 at home with her daughters by her side eight days after celebrating her 90th birthday.  Patsy was born in Duluth on November 7, 1928 to Erik and Ruth (Magneson) Sjoberg. The eldest in a family of five, she often shared fond memories and funny stories about growing up in a close-knit family in the Morley Heights neighborhood during a time when “everyone knew eveyone else”.  She made friendships there that lasted a lifetime. Pat attended Washburn Elementary School, East Junior High, and graduated from Duluth Central.  Following graduation, she worked for several years at First American National Bank and on August 26, 1950, married her sweetheart Richard (Dick) Nelson. The couple welcomed their first daughter 2 years later.  After living for a short time in southern MN, where their second daughter was born, they returned home to Duluth and settled in the Woodland area to raise the girls. She was a member of Glen Avon Presbyterian Church. To Pat, family meant everything.  She was a loving mother, grandmother and great-grandmother; a supportive sister, sister-in-law and aunt, and a devoted caregiver to her husband during his 15-year illness.  She spent almost every summer weekend from the time she was 12 and for the next 50 years, at the family cabin on Shultz Lake. There she loved sitting by the water, watching birds, listening to the wind, and most of all being a part of the big family gatherings every Sunday - which continued to get bigger as the the extended family grew.  Throughout her life, Pat enjoyed simple things - visiting with people; sharing a meal; a good cup of coffee and lemon pie, and tending to flowers. She was a loyal friend and a good neighbor who always took the time to listen; didn’t hesitate to do a favor, and almost never forgot a birthday or special occassion. Known in her later years for her jaunty hats, Pat was a bit of a fashionista too.  She loved to shop for great things at a good price - and she always looked good! Sharp until the end, she had a good sense of humor, loved listening to music, and was fun at a party. She enjoyed several memorable vacations, including travel to Florida, Hawaii, Sweden, Branson, Las Vegas and a road trip to the west coast. She especially treasured the annual winter trips she took to visit her grand daughter and great grand daughters in Charleston, NC.  She lived a full life and will be dearly missed by family and friends.Pat was preceded in death by her parents; her husband, Richard; two brothers, Ron and Harry Sjoberg, and a sister, Marlene Fjone. She is survived by two daughters, Cathy (Jayme) Hartman of Duluth and Karin Ramberg of Duluth; two grandchildren, Erika (Jeff) Romfo and Tony Ramberg; two great-grandchildren, Ava and Emily Romfo; a sister, Barb (Lynn) Peterson of Duluth; a sister-in-law, Pat Sjoberg of Duluth; many nieces, nephews and two grand dogs, Lucy and Chauncey. Funeral services will be held at Glen Avon Presbyterian Church 2105 Woodland Avenue, Duluth at 11 am Wednesday, December 5th, with visitation one hour prior to the service.  Burial will be Patriciin Forest Hill Cemetery.  Please consider memorials to Glen Avon Presbyterian Church or the Union Gospel Mission.The family would like to sincerely thank the Essentia Cardiac Team and St. Mary’s Hospice workers for their compassionate care and support.

To send flowers to the family in memory of Patricia Nelson, please visit our flower store.