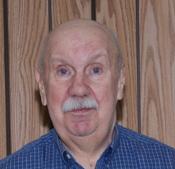 Patrick C. "Rick" Jennison, 75, of South 69th Ave West, died Tuesday, January 7, 2014 in St. Luke's Hospital following a brief illness. He was born in Duluth on December 30, 1938 to Charles and Genevieve Jennison. Patrick attended Denfeld High School and spent his working career with the Jeno's Corporation. He married Stella Schlee in Proctor on July 1, 1972. Patrick was an avid bowler and sports enthusiast, following all his favorite teams. He was a member of the former West Duluth Moose #1478. He made his morning rounds for coffee at McDonald's and K-Mart Grill, socializing with everyone he met. He was preceded in death by his parents; sister, Alice Lamphier; brother, Ray Jennison and pet, Malibu. He is survived by wife, Stella; daughter, Tina Schlee (Kurt Martwig) of Duluth; a grandson, Christopher Martwig of Arizona; two sisters, Beverly (Willard) Carlson of Duluth and Mildred Jennison of Fredrick, Wisc; several nieces and nephews. Visitation will be from 1 until the 2 p.m. Celebration of Life service on Tuesday, January 14, 2014 in Williams Lobermeier Boettcher Funeral Home. Memorials to Animal Allies Humane Society would be appreciated.

To send flowers to the family in memory of Patrick Jennison, please visit our flower store.