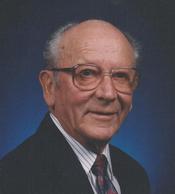 Philip Victor Sjoblom, 93, of Duluth, died Sunday, February 17, 2013 in Essentia Health-St. Mary's. Philip was born on August 9, 1919 in Two Harbors, MN to John and Sophia (Ostman) Sjoblom. Philip did charter fishing on Lake Superior, earning his captain's operating license from the Coast Guard in 1940. He married Ruth Carlson on October 10, 1941 in Two Harbors. Philip served with the Army Air Corp during World War II and received the Expert Medal on sharp shooting. Following the War, he worked for U.S. Steel-Duluth Works for 32 years, as a mixer operator. He also worked for the R.E.A. and finished his working career at National Iron. He enjoyed traveling, fishing, hunting, music and carpentry. He was a talented musician, playing the accordion, violin, piano and organ. His carpentry and electrician skills were helpful in building his family's resort, his own cabin and all the furnishings and his cabin cruiser for Lake Superior. He was a member of Bethany Lutheran Church and sang in the choir for many years, American Legion Post 109 in Two Harbors and volunteered for Meals on Wheels for many years. He was preceded in death by his parents, sisters, Ruth and Violet and a brother, Lester. He is survived by his wife of 71 years, Ruth; two sons, John of Montevideo, MN, Steven of Duluth and a daughter, Wendy (Tom) Sarkela of Denver, CO; a brother, Eric (Marlys) of New Brighton, MN; grandchildren, Jennifer, Lauren, Isaac and Jacob; numerous nieces and nephews. Memorial service 11 a.m. Friday, February 22, 2013 in Bethany Lutheran Church. 2308 West 3rd St. Pastor Gregory Daher officiating. Burial in Lakeview Cemetery, Two Harbors. Memorials to Bethany Lutheran Church would be appreciated. To sign the guestbook on line, visit www.wlbfuneralhome.com. Arrangements by Williams Lobermeier Boettcher Funeral Home.

To send flowers to the family in memory of Philip Sjoblom, please visit our flower store.