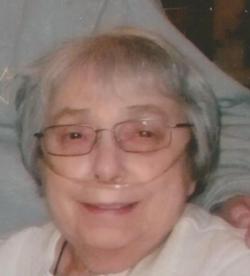 Phyllis C. Donahue, 76, lifelong West Duluth resident, died Tuesday, October 7, 2014 at the Solvay Hospice House surrounded by her family. She was born on October 29, 1937 to Louis and Dagney Stockman in Duluth. Phyllis was a 1955 graduate of Denfeld High School and married Ronald Donahue on April 28, 1956 in Duluth. Phyllis was a clerk at the DWP Railroad for 27 years, retiring in 1992. She was a member of Elim Lutheran Church and the Women's Circle, the National Association of Railway Business Women, active with Bible Study and Christian Women's group in Duluth. She enjoyed baking, cooking, traveling, reading, fishing at their cabin on Whiteface and watching Judge Judy. She was preceded in death by her parents, husband, Ronald, and son, Jon on September 13, 2014. She is survived by a daughter, Kelly (Russel Dresser) Donahue; two sons, Kevin (Ava) and Robert; a sister, Cleo and a brother, Bruce; grandchildren, Alyssa, Jacob, Tyler, Emily and Candice; a great-grandson, Mason. Visitation 10 until the 11 a.m. Memorial service Tuesday, October 14 at Elim Lutheran Church, 6101 Cody St. Pastor Jim Hagen officiating. Burial at Oneota Cemetery. Memorials to Solvay Hospice House would be appreciated.

To order memorial trees or send flowers to the family in memory of Phyllis Donahue, please visit our flower store.