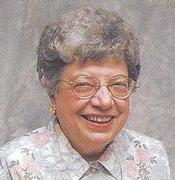 Prudencia "Prue" Vaillancourt, 92, of Duluth, passed away peacefully on Tuesday, December 31, 2013 in Edgewood Vista surrounded by her family. She was born in Duluth on July 1, 1921 to Philip and Leona Vaillancourt. Prue was a 1939 graduate of Denfeld High School and worked for the Duluth School District retiring as head secretary for Central High School. Prue was a member of St. Lawrence Catholic Church where she was active with the funeral committee, the OK Club and the Women's Club. She belonged to the Central Retiree's Lunch Group and volunteered at Viewcrest Health Center where she was also a member of the Auxiliary. She was preceded in death by her parents, a brother, Richard Philip and a nephew, Howard Vaillancourt. She is survived by two sisters, Alice Vaillancourt of Duluth and Phyllis Kesler of Tucson, Ariz; six nieces and nephews and several great nieces and nephews. Visitation will be from 10 until the 11 a.m. Mass of Christian Burial Saturday, January 4, 2014 at St. Lawrence Catholic Church. 2410 Morris Thomas Rd. Fr William Fider officiating. Burial in Polish Catholic Cemetery. Memorials to St. Lawrence Catholic Church would be appreciated. To sign the guestbook on-line, visit www.wlbfuneralhome.com. Arrangements by Williams Lobermeier Boettcher Funeral Home.

To order memorial trees or send flowers to the family in memory of Prudencia Vaillancourt, please visit our flower store.