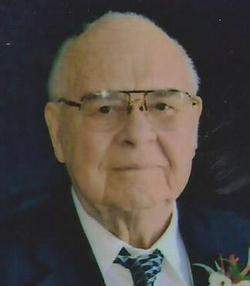 Ray Irvin Peterson, 93, formerly of Harvey St, died Wednesday, May 28, 2014 at Viewcrest Health Center. Ray was born on April 28, 1921 to Ralph and Madge Peterson in Alborn, Minn. He attended school in Cotton, Minn and also UMD. Ray served in the Navy as an Electrician's Mate during World War II. Following his tour in the Navy, Ray returned to Duluth and started working for the D.M & I.R. Railroad as an Electrician. He married Mary Peterson in Duluth on April 13, 1946 and they started their family. Ray retired from the railroad in 1971 and taught Commercial and Residential Wiring at Duluth Vocational School for 10 years, retiring in 1981. Ray was very active at Lincoln Park Baptist Church, formerly Temple Baptist, where he sang in the choir, taught Sunday school, served on the trustee and deacon boards and was church treasurer. Ray enjoyed hunting, fishing and spending time with his family and friends. He was preceded in death by his parents, brothers, Earl, Ralph and Dean; a grandson, Kyle Nienaber; a great-grandson, Connor Robison. Ray is survived by his wife of 68 years, Mary; daughters, Alvina (Gerald) Olson of Denver, Iowa, Louella (Ronald) Heckathorn of Duluth and Kristine (Kent) Nienaber of Ham Lake, Minn; a son, Arlan (Ruth) of Duluth; 14 grandchildren and nine great-grandchildren. The family would like to thank all the staff at Viewcrest Health Center for the wonderful care they provided. Visitation will be from 5 to 7 p.m. Friday, June 6, 2014 in Williams Lobermeier Boettcher Funeral Home and will continue from 12 noon until the 1 p.m. funeral service Saturday, June 7, 2014 at Lincoln Park Community Church, 2202 West 3rd St. Rev Paul VanCamp officiating. Burial in Sunrise Cemetery with military Honors accorded by the Duluth Combined Honor Guard. Memorials to Lincoln Park Community Church would be appreciated. To sign the guestbook on line, visit www.wlbfuneralhome.com. Arrangements by Williams Lobermeier Boettcher Funeral Home.

To send flowers to the family in memory of Ray Peterson, please visit our flower store.