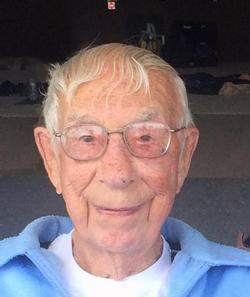 RAYMOND JAMES BREOLE Age 94 of Duluth, passed away peacefully on Saturday, August 27, 2016 with his daughter Ilona at his bedside at St. Luke's Hospital. He was preceded in death by his parents, Joe and Jennie Breole, wife, Lila Breole and sister Marion Carlson. Survivors include his daughter, Ilona (Duane) Kerin of Edina, MN, grandchildren Troy (Lynne) Kerin, Todd (Diane) Kerin of Edina, great-grandchildren Danika, Kelly, Casey and Catherine Kerin, sister, Jean Greene, niece, Judy Greene-Nielsen, nephews, Jim Greene, Joe Greene, Doug Carlson, Gary Carlson, and grandniece Tara Amiot. Ray was born in Duluth on July 18, 1922 and graduated from Central High School. During his school years he was known for his athletic accomplishments and earned letters in gymnastics, tumbling and ski jumping. Ski jumping was a hot sport with Chester Park holding the world's tallest jump and eventually holding a total of five jumps! He also earned a golden glove in Lightweight boxing at Jack O'Brien's stable in Ironwood Michigan in 1939. During WWII he served for three years in the Air Force on Saipan and Iwo Jima. Corporal Breole enjoyed sharing his stories of serving his country. After a sheet metal apprenticeship at Walker Jamar Company he founded Highland Sheet Metal and later Highland Oil. Ray's passion for flight and aviation started at an early age and continued throughout his life from 1938 to 2016. His favorite pastime was flying to various lakes in Canada and working on his cabin when he wasn't wetting a line at Perch Lake, Ontario. As a retiree, he would use his company's building on Central Entrance known to local pilots as "Ray's Aircraft Factory". The morning crowd would check on the single engine plane. Later he moved "The Aircraft Factory" to his new hangar at Richard I Bong Memorial Airport in Superior. If Ray wasn't flying, he was Skydiving at Superior Diving, his next door neighbor Hangar A7. Great Granddaughter, Kelly Kerin wanted to follow in his parachute stream. She jumped from 13,000' with GG Ray watching. He had two jumps at 90 and 94 yrs. Superior Diving posted on their Facebook page that they had their Oldest and Youngest jumpers in the hangar that day! At home on Harvey Street he was his own farmers market delivering his harvest from his back yard. Neighbors and friends would receive flowering plants and produce from his garden. Andy Switzer was his next door neighbor who would share his experiences, all 24 years of them. Ray would also share his ninety-four years of his! A True Friendship! He was a lifetime member of The Experimental Aircraft Association, a nationwide group of small-plane enthusiasts. He was called a "Master Aircraft Builder" by the male and female pilots at The Hangar. A Celebration of Life will be held at The Hangar located at 4804 Hammond Avenue in Superior on Saturday, October 15, at twelve noon. A private interment will be at Calvary Cemetery. To sign the guestbook online, visit www.wlbfuneralhome.com Williams Lobermeier Boettcher Funeral Home is entrusted with final care.

To send flowers to the family in memory of Raymond Breole, please visit our flower store.