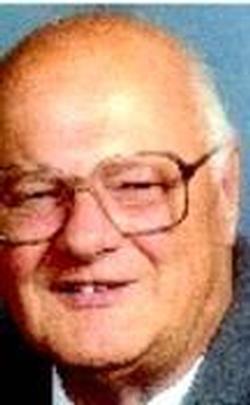 Raymond George Tessier, 88, Duluth, died April 1, 2015, at Solvay Hospice House, surrounded by his family. He was born in Duluth on July 9, 1926 to Joseph and Bertha Tessier. Raymond grew up in the West End and was a 1944 graduate of St. Jean's High School. He was a Navy Veteran of World War II, serving in the Pacific on board the aircraft carrier the USS Bon Homme Richard. Raymond then continued serving in the Naval Reserve until 1952. He had worked at Northwestern Bell/US West, retiring after 43 years of service. He married Patricia Spalding on Feb. 7, 1959. He was a member of St. John's Catholic Church, life member of VFW Post 137 and member of the French Club and the Telephone Pioneers. Raymond was a Junior Achievement Sponsor and volunteered his time as a cook at the Tessier-Waltman Softball Tournament for over 20 years. He enjoyed camping, traveling, golfing and watching his children and grandchildren play sports. His true passion was woodworking. He made custom furniture for his wife, children, grandchildren and great-grandchildren. Raymond was preceded in death by his parents and brothers Maurice and Lawrence. He is survived by his wife, Patricia; daughter Beth (Scott) Johnson; sons Scott (Carrie) Tessier, Gregory Tessier and Neil Tessier; grandchildren Marie (Joe), Kris, Alex, Kelsey, Kellen, Shauna, and Mara; great-grandchildren Honah and John; siblings Joe (Julie) Tessier, Sis Boone and Gen (Sarge) Larson and Aunt Mildred Mathison. VISITATION: 10 a.m. until the 11 a.m. Mass of Christian Burial Saturday, in St. John's Catholic Church, 4230 St. John's Ave, Duluth. Memorials may be given to your preferred charity. Arrangements by Williams-Lobermeier-Boettcher Funeral Home.

To send flowers to the family in memory of Raymond Tessier, please visit our flower store.