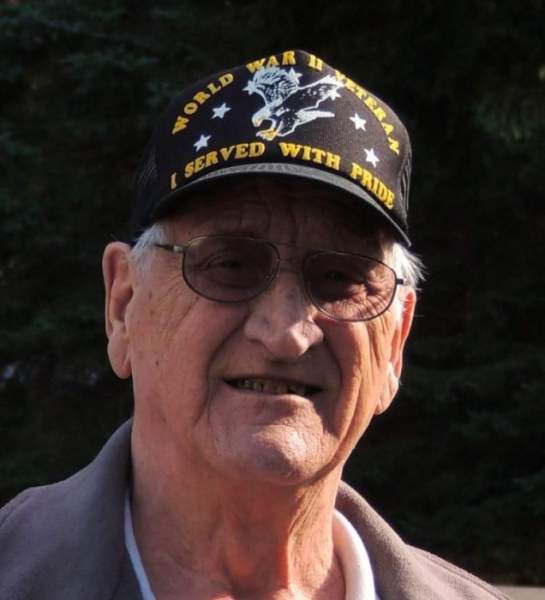 Raymond L. Walters, 91, World War II Veteran, of Esko, passed away at the Community Memorial Hospital in Cloquet on June, 21, 2018. Raymond was born on October 25, 1926, to Bennie and Miriam (Zigmont) Walters in Willow River, MN. Ray grew up with his four brothers and attended Willow River High School. Raymond enlisted into the US Navy at the young age of 17 during World War II, serving in the “NTC Great Lakes” and South Pacific aboard the USS New Orleans (CA32) and honorably discharged as a “Seaman First Class”. Raymond married Martha Kovacevich on December 21, 1946, they raised three sons, they were married for 33 years. Ray was active in scouting and was an Assistant Scout Master. He was also active with the Stowe PTA and St. Elizabeth’s Church, where he was a Lector and member of the KSKJ Lodge. Raymond remarried February 10, 1979 to June (Nelson). June passed one week before their 35th wedding anniversary. Ray and June after retiring, traveled to Hawaii, Oregon, Phoenix, Kansas City and the Lake Superior Circle Tour. They enjoyed their dogs, Pixie Jane, Sadie, and Honey. Ray and June volunteered at the Salvation Army, and mentoring as foster grandparents, and supporters of Animal Allies and Humane Society. Ray maintained membership in #66 AFSME, CIO #1210, AARP, VFW Post 6320, Salvation Army, Perkin’s Senior Club and St. Francis Catholic Church in Carlton. Raymond worked for 30 years at Universal Atlas Division in Gary New Duluth as a Master Electrician until the plant closed in 1978. Ray then worked 18 years for the City of Duluth, retiring in 1988, at the age of 62. In September 2012, Ray attended the Northland Honor Flight to Washington D.C., with Rick, where he visited the World War II Memorials. In 2016, Ray enjoyed going with his son, Joe, to the San Diego Naval Base to tour the USS Pinckney, a guided missile destroyer. Ray was a large, but gentle, big hearted man, at the age of 91, still living independently in his home, caring for all needs up to his death. Ray was preceded in death by his parents; his four brothers, Edward, Lavern, Floyd and Gene; two wives, Martha in 1977 and June in 2014; two sons, baby Walters in 1948 and Steven in 2003; and many relatives and good friends. Ray is survived by his sons, Joseph (Kelly) Walters of Coon Rapids and David Walters of Eugene, OR; step-children, David Nelson of Superior, WI, Rick (Kathy) Nelson of Duluth, Kim (David) Sykes of Brainerd, MN and Todd Nelson of Orlando, FL; several grandchildren and great-grandchildren. A special thank you to the Doctors and Nurses at the Community Memorial Hospital in Cloquet. Also, a special thank you to Ray’s neighbors, the Lauery Family, Deacon Bryan Bassa and special friends at the Perkin’s Senior Club. A private family service will be held at St. Francis Catholic Church in Carlton. Military Honors accorded by the Carlton VFW Honor Guard. Burial at Calvary Cemetery in Superior. Arrangements by Williams Lobermeier Boettcher Funeral Home.

To send flowers to the family in memory of Raymond Walters, please visit our flower store.