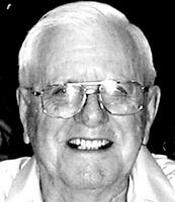 Raymond Donald Zomerfelt, 90, peacefully passed away on Saturday, April 13, at home with his loving wife by his side. He was born Oct. 17, 1922 in Duluth, to John and Victoria Zomerfelt. He attended Denfeld High School and went on to CC Camp in Elgin Junction. Raymond served in the Army until 1945, attaining the rank of Sergeant as a Radio Operator during World War II and was very proud of his service as well as his many honorary medals. On July 3, 1948, he married the love of his life LaDonna Anderson. This year they would have celebrated 65 years of marriage. He lived in Duluth his entire life and worked as a television repairman for many years, he co-owned P&G (Pollack and German) TV Repair in Superior, Wis. Raymond was a member of VFW 137 and American Legion. He loved camping, bowling and going to the casino, but mostly he loved spending time with his family. He was a wonderful husband, father and grandfather. He will be especially remembered for his compassion and sense of humor, he had the patience of a "Saint" and he was a friend to many. Hence, Everybody Loves Raymond! Raymond was preceded in death by his parents, brother Walter, sister Bernice and great granddaughter Avery Rae. He leaves behind his wife LaDonna; four children, LaRae (George "Skip") Kirk, Steven (Julie) Zomerfelt, Kathleen Flaherty, Brenda Jank-Tocholke; 13 grandchildren; and 17 great-grandchildren. FUNERAL SERVICE: 1 p.m. Saturday, April 20, at Williams Lobermeier Boettcher Funeral Home, 3208 W 3rd St. Visitation at noon until the time of the service. Luncheon will follow the service in the American Legion, 5814 Grand Ave.

To order memorial trees or send flowers to the family in memory of Raymond Zomerfelt, please visit our flower store.