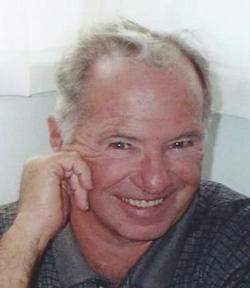 Richard Curtis Anderson, 87, of Duluth, passed away peacefully on Tuesday, February 9, 2016 at the Benedictine Health Center. He was born on February 8, 1929 in Duluth, MN to Kurt and Catherine Anderson. He graduated from Cathedral Senior High School and shortly after served in the U.S. Air Force as a Radio Operator stationed in Adak, Alaska; South Korea and Texas. He married Joan Karlen on April 27, 1957 at St. Jean's Catholic Church in Duluth. Richard worked for the United States Post Office for 30 years, retiring in 1994. Richard was a member of St. Joseph's Catholic Church of Duluth Heights and the American Legion Post 71. He was active in, and passionate, about hockey as a participant into his 20's, and later as a tireless coach and referee. He was pivotal in establishing a rink and hockey program in the Norton Park neighborhood, worked to establish a traveling Bantam team from West Duluth (Duluth Police Bantam A team) and was a part of the DAHA board of directors for a number of years, notably during the building of the Peterson and Fryberger Arenas. Once his children were grown, his love and knowledge of Lake Superior translated into an active boating life. He was a member of the Duluth Power Squadron for many years. Rarely was he happier than at the helm of his boat on Lake Superior and he carried this passion well into retirement sharing this with his children, grandchildren and great-grandchildren. He and his wife travelled frequently enjoying many trips to a variety of locations including Mexico, Alaska and Hawaii. They spent 10 years living in the Ft. Myers area of Florida where he was active in the Ft Myers Chapter of the National Assoc. of Retired Federal Employees and served a term as President. Above all, Richard valued family. He was the devoted and unwavering anchor his wife, children, grandchildren and great grandchildren could depend on for advice, support and unconditional love. He was preceded in death by his parents; brothers, Thomas and William Anderson; and sister, Catherine Sieben.

To send flowers to the family in memory of Richard Anderson, please visit our flower store.