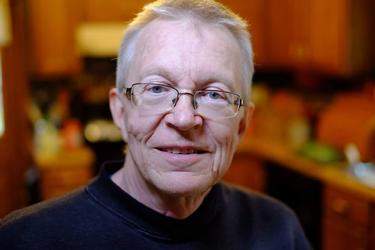 Richard Norman "Dick" Bodine, 71, died Friday, December 25, 2015 at Edgewood Vista. Dick was born in Duluth on January 25, 1944 to Norman and Eleanor (Palm) Bodine. He was a 1962 graduate of Denfeld High School then joined the 148th Fighter Group as a Guard member and full time employee. Dick also worked at the Red Carpet Bar and Lounge part time. He married Sue Lehman on March 1, 1968 in Watertown, SD. After retiring from the 148th he became an IT Tech at Essentia Medical Group where he finished his working life into retirement. He was a member of St. John's Church. He was also a long time member of the Arrowhead Radio Amateur Club which he used to help the National Weather Service, Grandma's Annual Marathon and Inline Skate. He was involved in many other community events over his lifetime. His residences included homes on Wabasha St. in Woodland and then to Apple Ave. in Duluth Township where he was a member of the Township Board. He will be greatly missed but we are grateful his battle with cancer is at an end. He was preceded in death by his parents, a sister, Kay Bodine and a daughter, DebbieSue Sharp. Dick is survived by his wife, Susan Bodine; a daughter, Tracy (Bodine, Rippberger) Robertson and her husband, Shane Robertson; a son, Christopher (Mia)Bodine; four grandchildren, Krystina Rippberger, Tia and Danielle Bodine and Niki Sharp; a great-granddaughter, Layla Deutch; a niece, Tina (Bodine, Hood) Valppu, her husband Johan and their children, Eero and Seija Valpuu. Visitation 10 until the 11 a.m. Memorial Service Wednesday, December 30, 2015 at Williams Lobermeier Boettcher Funeral Home. Deacon Dennis Anderson officiating. Military Honors accorded by the Duluth Combined Honor Guard. A reception to follow. In lieu of flowers, memorials are preferred. To sign the guestbook on-line, visit www.wlbfuneralhome.com. Williams Lobermeier Boettcher Funeral Home is entrusted with final care.

To send flowers to the family in memory of Richard Bodine, please visit our flower store.